At 74 years old, there is no slowing down the legendary Buffy Sainte-Marie. With a long history behind her she has just released her twentieth album, Power In The Blood on May 12, 2015. Sainte-Marie has worn many hats as a singer, songwriter, teacher, actress, humanitarian, activist and world traveller. She has witnessed and accomplished many things and in honor of her many feats, here are eight interesting facts regarding Buffy Sainte-Marie’s lengthy career:

Buffy is the first Indigenous person to win a coveted Oscar in 1983 for her song, Up Where We Belong. “Right now my Oscar is in the Smithsonian, because I’m the first Native American, I think the only, to win an Oscar” she says, not letting success get to her head. On top of all of this, her award case includes a Gemini for the same Oscar winning song, a Juno in 2009 and most recently the Governor General’s Performing Arts Award in 2010.

One of Buffy’s main goals is to educate people around the world about Indigenous people and to reverse the associated negative stereotypes. For five years between 1976-1981, Sainte-Marie was a regular on Sesame Street, pushing societal boundaries with topics such as educating Big Bird on breastfeeding her child, Cody, onscreen.

It’s also well documented that Buffy has been a digital artist since 1984. Her collection, 16 Million Colours, includes eleven mostly large scale images that can be found in galleries across North America including The Winnipeg Art Gallery, First Nations University, American Indian Arts Museum, The Gallery for Contemporary and Indigenous Art (Tucson) amongst others.

4. Ahead of Her Time

It’s fitting that someone who embraced technology from the onset became the first documented person to send a digital file over the Internet. In an interview with The Guardian she is quoted as saying “Do you know…..my album Coincidence & Likely Stories in 1991 was the first ever delivered via the internet and the Guardian did a big story on it with a picture? People didn’t want to know about electronic music or digital or any of that then, but you were the first paper in Europe to write about the early use of the internet in that way.”

Buffy Sainte-Marie on a Rollercoaster Career… – The Guardian

In addition to her appearance on Sesame Street, Sainte-Marie also founded The Cradleboard Teaching Project. Funding it mostly out of her own pocket, she has expanded it with the help of support from W.K. Kellogg Foundation, the Ford Foundation, the Herb Alpert Foundation and the Global Fund for Children. The mission statement reads: “It’s our hope at Cradleboard that we can joyfully replace the old inaccuracies, with reality, delivered by teams of experts; to the lifelong benefit of Indian children; and that every mainstream child will have access to an enriching Native studies unit provided by Indian people, including children of his or her own age.”

Buffy lives in Kauai, Hawaii peacefully on an estate with goats. As “a young singer with too much money. I had been travelling so much and I was too famous for my own good,” she then decided to settle down in a solitary piece of property she found in the 60’s where she now resides with approximately 27 goats, two horses, chickens and a cat.

Buffy played a pivotal role in helping fellow artist Joni Mitchell get signed. Both “came from Saskatchewan and (Joni) was being ignored by the folk bosses who ran the record companies. I thought that she and my friend Leonard Cohen were fantastic talents, so I carried Joni’s tape around in my purse, playing it for all the bigwigs. Finally a young guy in an agency I was working with got it! He became her manager and built a huge career with her.”

Buffy Sainte-Marie was so badass, she was blacklisted by the American government for her outspoken views on the Vietnam War and Indigenous rights. “Recognizing the power of her songwriting and activism, the Lyndon Johnson and Richard Nixon administrations considered her an ‘artist to be suppressed,’ and Sainte-Marie all but disappeared from the US music industry.” 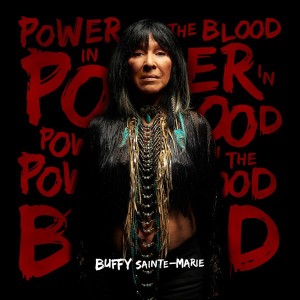 Power In The Blood was recorded in Toronto with three producers: Michael Phillip Wojewoda (Barenaked Ladies, Rheostatics), Jon Levine (Nelly Furtado, K’naan, Serena Ryder) and Chris Birkett (Sinéad O’Connor, Talking Heads). Alongside new original tracks that touch on “the sanctity of life, the splendour of Mother Nature and scathing political and social commentary,” are the opening cut “It’s My Way,” a re-recording of the title track from her 1964 debut album, and “Power in the Blood,” a collaboration with electronic group Alabama 3.

TRACK LISTING:
It’s My Way / Power in the Blood / We Are Circling / Not the Lovin’ Kind / Love Charms (Mojo Bijoux) / Ke Sakihitin Awasis / Farm In the Middle of Nowhere / Generation / Sing Our Own Song / Orion / The Uranium War / Carry It On