Angela DeMontigny has a passion for design. She displays an extraordinary ability to produce a contemporary, ready-to-wear collection and one-of-a-kind pieces of wearable art that not only express her zeal for her native culture and heritage, but also shows that she is street smart and style savvy when it comes to delivering marketable merchandise.

Edginess and elegance intertwine with cultural Chippewa-Cree-Metis elements. As an Aboriginal designer, DeMontigny captures the true essence of her culture using traditional materials and design motifs. She often uses techniques like bead-work and the manipulation of hides, skills that were passed down from her ancestors, to create a wardrobe for the modern fashionista. 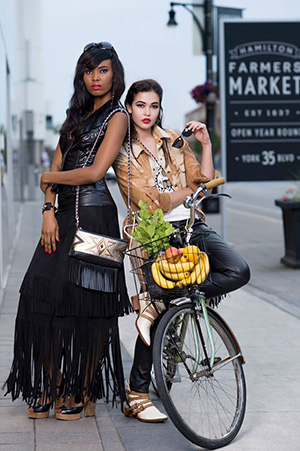 In 1995, from her home base in southwestern Ontario, Angela first launched her exclusive line of original, one-of-a-kind, leather and suede garments that have been sold in specialty boutiques and galleries throughout North America, and Europe. Since then, the Angela DeMontigny line has evolved to include accessories: a new collection of luxury, leather handbags that marry exquisite, European craftsmanship with DeMontigny’s signature edgy style, along with beautiful leather belts, matching cuffs and original, custom belt buckles that feature semi-precious jewels and crystals.

Angela’s celebrity as a native fashion designer is evident today not only because of her burgeoning and successful career, but also in part due to her regular speaking engagements and advocacy of other native artists and designers.

She has become one of the leading, elite aboriginal designers in Canada and her appeal is often to the entertainment world, attracting accomplished singers, performers and celebrities. Her wardrobing credits & interviews include the National Aboriginal Achievement Awards, a variety of national television shows, the Aboriginal Music Awards, Fashion Television, Breakfast Television, Aboriginal Peoples Television Network, and was a feature of ‘Success Story’ a regular CTV News segment; her designs have been showcased in numerous fashion and aboriginal magazines in Canada and the U.S. such as Flare, Chatelaine, Women’s Wear Daily, Aboriginal Voices, Spirit Magazine, Cowboys & Indians, Tribe, True West, Say Magazine and most recently, COWGIRL Magazine. Angela was also the subject of a half hour documentary produced by the NRK television network in Norway which was shown throughout Norway.

The last few years have been very busy for Angela…along with her design abilities, she is also a recognized show producer and not only produced but debuted her Skins & Stones Collection during the highly successful, Aboriginal Designer Showcase – 4 days of glamorous runway shows featuring the best of Canadian Aboriginal Designers from across the country – during the first week of the 2010 Olympic Games held in Vancouver, February 2010. Angela was a jury member for the 4th Annual TELIO Design Competition held during Montreal Fashion Week, Feb. 2011, received one of the first Fashion Fellowships at the Buffalo Bill Historical Center in Cody, WY and has recently been commissioned for a 4th consecutive year to custom design the outfits for the 2012 Calgary Stampede Royalty during their 100th Year Centennial Celebrations.

Angela was recently the featured designer at the Art Gallery of Hamilton’s annual fundraising Gala, themed “Canadian Wonderland”, because of her original representation of her Native culture. 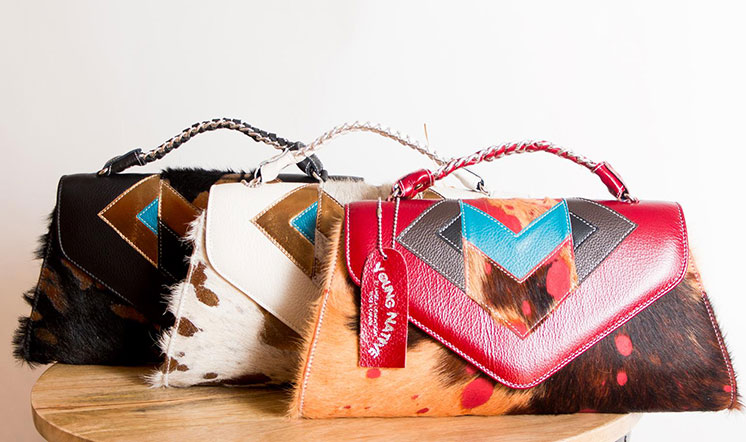