These young artists exude a certain youthful courage in their work. By that, I mean that they’ve created these works solely for the purpose of expression likely without external influences

Q & A with curator Pam Brown

Pam Brown has worked for the Museum of Anthropology for over 20 years and is well respected for her work with the Native Youth Program in its 34th year.  Her collaborative exhibitions with Aboriginal communities include Kaxlaya Gwilas: The Ones Who Uphold the Laws of our Ancestors, and Mehodihi: Well-Known Traditions of Tahltan People. Her 2013 installation Mṇúkvs wúwáxdi: One Mind, One Heart, documents HeiltsukNation opposition to tankers transporting Alberta tarsands oil through their waters.

From time immemorial, Indigenous artists have been creating innovative and expressive art as a means of communication and storytelling. This month the Museum of Anthropology (MOA) in British Colombia opened a new exhibit entitled Claiming Space: Voices of Urban Aboriginal Youth, showcasing young Indigenous artists from across Turtle Island. With a collection of film, fashion, photography, painting, performance, creative writing, and new media, critics are calling the exhibit “thought provoking” as well as “radical and heavily politicized”. Curated by Heiltsuk artist and Museum of Anthropology Curator Pam Brown, along with Curatorial Assistant Elle-Máijá Tailfeathers, Claiming Space opened on June 1st, 2014 and will be on exhibit until January 4, 2015. Pam Brown spoke to MUSKRAT Magazine about the inception of Claiming Space and the significance of the exhibit:

PB: Claiming Space: Voices of Urban Aboriginal Youth brings together over 28 artists, ages 15 to 25, from across Canada, the United States, Norway, and New Zealand, including the collaborative group works by youth at the Urban Native Youth Association, at Musqueam, and the Native Youth Program.

Of those artists, over 80% are young women. For many of the artists, this is their first major exhibition.

MM: With so many artists from various Nations, what was the process for curating this exhibit? (i.e. was it an open call, did you approach artists directly, etc.)

PB: We had a submission process for curating this exhibit; we put out an open call in June 2014 and closed it in November 2014.

MM: Was there something in particular that led to the curation of Claiming Space?

PB: Claiming Space: Voice of Urban Aboriginal Youth came out of my 20 years of work with MOA’s Native Youth Program and ongoing engagement with youth in the community. Seeing urban native youth engage with the museum and the public inspired the need to provide a space for youth in the museum that reflects their unique lived experiences.

MM: Were you looking for any themes in particular for this exhibit? Are there themes that have emerged organically through the selection process?

PB: The focus of the exhibit was on identity, what it means to be an urban Aboriginal youth. We asked youth the following questions:  What inspires them? What experiences are uniquely theirs? How do they identify themselves? We also asked youth to share their perspectives about nation and territory and how they expressed their heritage, language, and cultural identity in their everyday life. Lastly, we asked youth what current social movements they were passionate about (eg. Idle No More).

The themes that emerged organically through the selection process include five areas of focus: 1.The Indigenous Sprawl presents urban spaces as sites of colonization.2. We are Culture challenges Canada’s long history of assimilative policies designed to eradicate Aboriginal cultures and languages.3. Adapting our Traditions examines the ways that traditions are morphing and adapting. 4. In The Gaze, artists confront the objectification and sexualization of Aboriginal women’s bodies. 5. We are the Keepers illustrates the impact of modern consumer culture on traditional values, through the eyes of a generation whose daily reality is informed by globalization.

MM: What are some of the differences you see with this generation of artists compared with more mature artists?

PB: These young artists exude a certain youthful courage in their work. By that, I mean that they’ve created these works solely for the purpose of expression likely without external influences—like the need to sell the work or the need to meet the requirements of a commissioned piece.

MM: Were there any unexpected pieces, any surprises?

PB: As we weren’t sure what to expect from the beginning, all of the works were unexpected. There were certainly a few surprises, like receiving six painted hand drums, five by young women. We also weren’t expecting so many film and new media works. This exhibition is the most media-heavy show MOA’s ever had. We were also surprised by the number of submissions from young women.

MM: What does the national landscape of art have to offer this next generation of visual artists?

MM: What do you hope patrons will take away from Claiming Space?

PB: This exhibit will broaden their understanding of critical issues affecting Indigenous youth all over the world. These young artists touch on the loss of land, language, and culture—the impact of resource extraction, the violence against Aboriginal women, and racism.

The exhibit is timely with the Idle No More movement, funding cuts for Aboriginal youth programming, and Canada’s Truth and Reconciliation Commission.

This show offers visitors a space to hear some of the voices of urban Aboriginal youth, and we hope it generates dialogue on all these critical issues. We hope patrons will leave with a stronger understanding of these young people’s diverse realities. 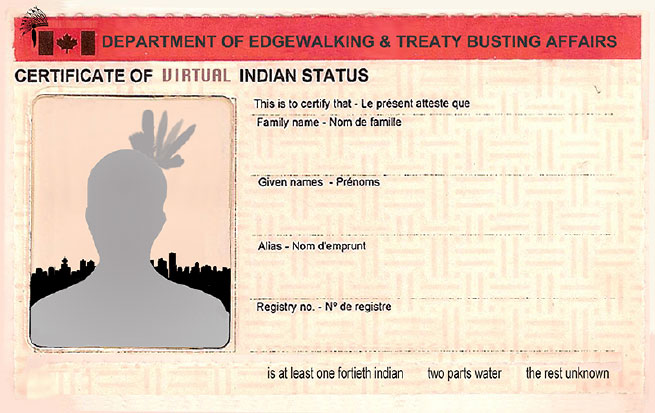