Eagle Vision announces that TAKEN the Podcast, a moving and emotional 10-part series that honours the stories and tries to uncover the truths behind Canada’s unresolved cases of Missing and Murdered Indigenous Women and Girls (MMIWG) is available now at www.takenthepodcast.com and on all major streaming platforms. The podcast was produced with the hope that new information will come to light, and these crimes will be solved. Produced by Eagle Vision, the award-winning team behind the TV documentary series TAKEN, the heart-wrenching series is hosted by Executive Producer Lisa Meeches (Anishinaabe from Long Plain First Nation) in English, and Sheila North in Cree.

Eagle Vision’s commitment to MMIWG and their families began when Meeches was expecting her first daughter. “When I found out I was having a daughter, I couldn’t hold back the thoughts and fears about the dangers our women and girls face. I wanted to do what I could to make a difference. That’s where the TAKEN series came from, and the podcast came out of that.” Meeches recognizes that “Canada is starting to wake up to the MMIWG issue. The National Inquiry was a start. The Calls for Justice are important. But these families want these cases solved. The time is now.” And she makes a plea to everyone, “If you know something, say something. Someone out there has answers; our goal is to find them.”

Throughout the series, TAKEN the Podcast will speak with family members, law enforcement, advocates, academics, elders, non-governmental organizations (NGOs), and knowledge keepers to learn about the women and girls who were murdered and remain missing.

The first episode shares the story of Tina Fontaine, a 15-year-old girl whose body was pulled from the Red River in Winnipeg in August 2014, sparking international attention, and shining a spotlight on the issue of missing and murdered Indigenous women and girls. 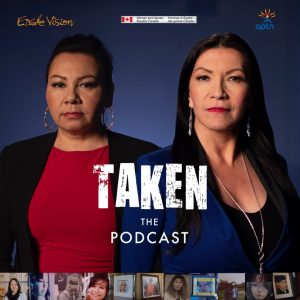 To find out more about Tina’s case, the producers dug deep and spoke with Tina’s great aunt Thelma Favel; Sargent John O’Donovan of the Winnipeg Police; Tina’s guidance counsellor, Cindy Guimonde; Nahanni Fontaine, the former Special Advisor on Aboriginal Women’s Issues for the Indigenous Issues Committee of Cabinet of Manitoba; a Spiritual Advisor Mary Wilson; Jody Wilson-Raybould, former Minister of Justice and Attorney General of Canada and current Member of Parliament for the B.C. riding of Vancouver Granville; Honourable Carolyn Bennett, the Minister of Indigenous and Northern Affairs; and many others from the academic and NGO communities.

Stories covered in future episodes include: