“…while oil companies are let off the hook, northern communities will be left to deal with the fallout of a spill that will all but destroy our ability to sustain ourselves off the land. This clearly undermines northern peoples’ right to a healthy environment and sustainable development, two of the principles engraved in the inaugural mandate of the Arctic Council that are now going unheeded.”

It’s March 24, 1989, and off the coast of Alaska, one of the worst man-made environmental disasters in history has just struck.
The Exxon Valdez supertanker hit Prince William Sound’s Bligh Reef at 12:04 a.m., spewing oil into pristine Arctic waters: 750,000 barrels of crude that would make this tragedy the worst in U.S. history until the 2010 Deepwater Horizon blowout in the Gulf of Mexico.
Three days after the spill, a storm pushed large quantities of freshly strewn oil onto the rocky shores of many of the beaches in the Knight Island chain. The damage is still visible and felt today.

Fast-forward 25 years to 2014. While two generations of fishermen continue to cope with the aftermath of this catastrophe, the Arctic Council — a body whose original mandate included ensuring sustainable development and pan-Arctic environmental protection — will meet in Yellowknife, just one day after the 25th anniversary of the Exxon Valdez, to continue to peddle its year-old document meant to address exactly this kind of disaster.

It’s called the Co-operation on Marine Oil Pollution Preparedness and Response in the Arctic, and as only the second legally-binding document in the council’s 18-year history, they are very proud of it.

So as the council meets in Yellowknife, the real question is: had this agreement been in place 25 years ago, would it have altered the outcome of that fateful day?

The truth is that it wouldn’t have made a difference. 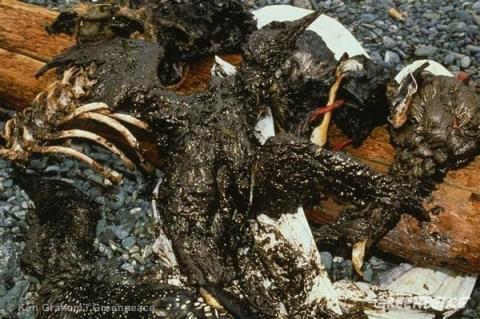 Despite being the first legally-binding agreement of its kind, it fails to outline any essential response equipment, methods for capping wells, or cleaning up oiled habitat and wildlife.

Instead it relies on vague statements that Arctic nations should “ensure” they try and take “appropriate steps within available resources” without even minimum requirements, leaving the door wide open for affected governments to delay and defer responsibility to execute cleanup efforts.

The bulk of the damage inflicted by the Exxon Valdez occurred in the first few days after the disaster. Experts tell us that unless containment and recovery equipment get on scene within the first three days, the oil will spread beyond any possibility of control.
Nothing in the council’s agreement ensures this rapid response. And shockingly, it has no provisions to hold companies liable for the full costs and damages of a spill.

And it’s no wonder, when you dive a bit deeper and look at who actually wrote this document. Photos issued on the Arctic Council’s Flickr photostream show oil industry representatives participating in the working group, including the meeting in which the document was finalized.

So while oil companies are let off the hook, northern communities will be left to deal with the fallout of a spill that will all but destroy our ability to sustain ourselves off the land. This clearly undermines northern peoples’ right to a healthy environment and sustainable development, two of the principles engraved in the inaugural mandate of the Arctic Council that are now going unheeded.

Rather than striving to avoid repeating history, the Arctic Council, with its passive leadership and pro-business agenda, is paving the way for similar tragedies on our Arctic coastlines.

The Exxon Valdez should be a reminder of how unpredictable and unforgiving the Arctic can be, and a lesson as governments prepare to open up the Arctic for even more drilling and shipping. Yet here we are, 25 years later and none the wiser for our past mistakes.

By opening the Canadian Arctic to oil and gas exploration, the Conservative government is setting the course for more oil spills and new tragedies. The Arctic Council, which Canada is now chairing, has done nothing to fight against this fate. Moreover, it is helping it come true.

The irony of life and the recklessness of our government is such that two of the companies that obtained leases for oil exploration in the Canadian Arctic are ExxonMobil and British Petroleum, first and second on the podium for the world’s worst offshore oil spills.

The livelihoods of traditional hunters and trappers, Inuit and First Nations fishermen, northern inhabitants and wildlife are all in the hands of destructive companies. We have not chosen this path and we will not pursue it. Reckless development in our fragile northern ecosystem will only bring destruction, inevitably eradicating our traditional relationship with the lands.

The North deserves a better future and we northerners must use our voices and choose a sustainable path forward.

Previous : HONOURING INDIGENOUS TERRITORIES IN ROB FORD NATION: MY DAY AT THE CIRCUS
Next : FORGIVENESS