…he was considered to have supernatural abilities by his Haida community.

Da.a xiigang, whose English name is Charles Edenshaw (b. 1839-1920) was a Haida Master Carver and artist, whose vast breadth of work laid a foundation of iconic symbolism within contemporary Haida carving traditions. Da.a xiigang’s incredibly detailed works are prolific, and he was considered to have supernatural abilities by his Haida community. His intricate lines and spacing are some of the most unique and beautiful examples of Haida art, which is why he has become legendary in the art world for his work. His work in argillite, wood, silver, gold, and other mediums can be seen at the McMichael Canadian Art Collection gallery in the final stop of a three stop tour that included the Vancouver Art Gallery and the National Gallery of Canada in Ottawa. The McMichael gallery invited MUSKRAT Magazine to visit the exhibition, and we were treated to a personal tour from Assistant Curator, Chris Finn, who shared accounts of Da.a xiigang’s life, and influences on his work.

Born at Skidegate in Haida Gwaii, as an infant he was given the name Da.a xiigang which means “noise in the house pit”. In keeping with Haida tradition, he was given several traditional names during his lifetime—Sk†l’wxan jaas which translates roughly to “fairies coming to you as in a big wave” and Nang qwi.igee tlaa.ahls, which was given to him at his parents’ last potlatch, and translates to “they gave ten *potlatches for him”. Later in his adult life he and his wife, Qwii.aang converted to the Anglican church, and following their marriage ceremony, they adopted their English names, Charles and Isabella. Edenshaw is said to be an Anglicized version of 7Idansuu, which was Da.a xiigang’s (Charles’s) clan name. Adopting a western partriarchal naming tradition was in direct contrast to the matriarchal, matrilineal Haida culture, and according to a great-granddaughter of the Edenshaw’s, this was especially difficult for Qwii.aang to accept since it meant her clan name, Yaguh-jaanas would not be passed down to her children.

The Charles Edenshaw exhibit includes over 80 pieces from public and private collections, and articulates a story of Haida culture, tradition, and resilience at a time of great transition. While Edenshaw’s use of mediums and imagery was greatly influenced by his colonial experience and access to new materials, his work maintains a deep reverence for Haida culture and storytelling. It is said that Da.a xiigang was a voracious reader of newspapers, who would collect the printed photographs and illustrations, which he would later carve into various pieces, including totem poles and bracelets. He would also use melted coin metal to make silver bracelets and other metal pieces, like napkin rings, spoons, and platters. The most prominent piece amongst this collection, according to Chris Finn, is the Silver Sea Bear Bracelet (late 19th centurty).

The exhibit is split into five themes, the first of which is called Haida Traditions, with items that were used in Haida households for practical and cultural purposes. Some of those items include beautifully crafted traditional Haida carvings in wood. Model long houses and totem poles, bowls and masks, benches, and chests each with intricate designs which include symbols of Da.a xiigang’s family clans. The argillite totem poles, chests and platters are part of the Narrative theme, and each represent a specific Haida story. The third section is the Style section in which Da.a xiigang’s distinctive aesthetic is emphasized and seen through a range of objects, including newer materials that were not necessarily traditional Haida mediums. This flows into the fourth section, New Forms, which signal the influence of newcomers to Haida Gwaii and include Victorian mantle pieces, walking sticks, and silver spoons. The final section is Legacies, which feature an array of pieces that span the breadth of Da.a xiigang’s lifetime and demonstrate his legacy. 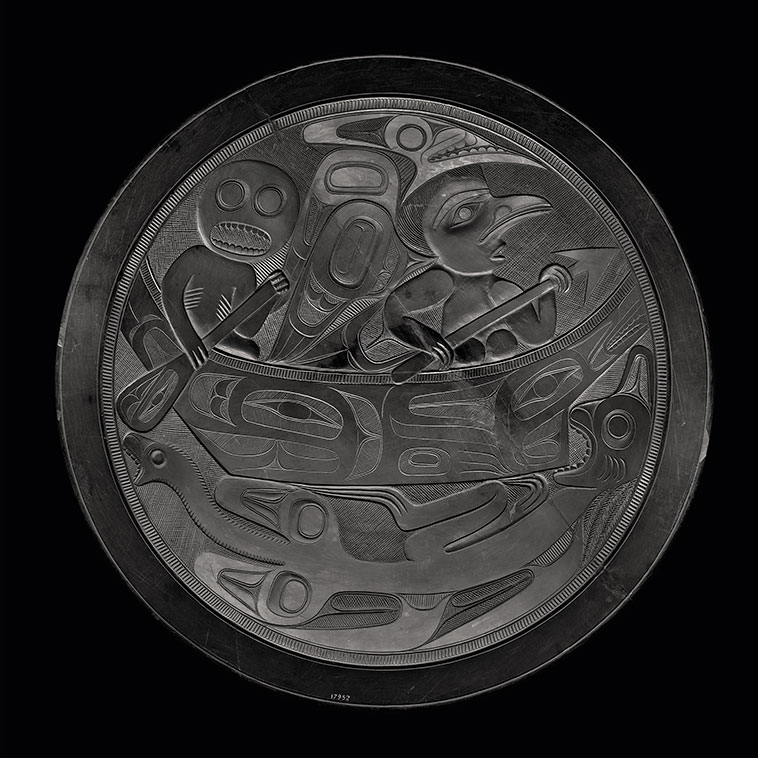 One of my personal favorite features of the tour was in the Legacies section, where multiple traditional Haida cedar-woven hats and baskets were on display. Da.a xiigang’s wife, Qwii.aang, was a master artist in her own right. A talented weaver, she was best known for her distinctive and beautifully woven designs on hats, baskets, and other pieces. Da.a xiigang would then paint the hats and baskets. For me, hearing about the two of them working together suddenly brought life into the objects sitting in glass cases.

The Charles Edenshaw Exhibition opened at the McMichael Canadian Art Collection gallery on June 28, 2014 and will continue until September 21, 2014.

*Potlatch is a give away feast and ceremony practiced by various North-West coast Nations to mark occasions like birth, death, marriage and other important events. It was banned in 1884 through colonial Canadian law, and the ban was not lifted until 1951