Indigenous and non-Indigenous public honouring of Indigenous territories has already been an entrenched protocol in western Canada for over a decade, however Ontario and Toronto have been slow to catch up.

As an Indigenous community organizer, advocate, and media producer in the largest city in Canada, there are times when you have to drop everything and let the day take you on twists, turns, and adventures you never expected. Sometimes it’s to cover a protest or to participate in a call to action, and sometimes it’s to attend a teach-in or speaking engagement. I had such a day this week- when Indigenous members of Idle No More Toronto called on me to present a proposal to the Executive Committee at Toronto City Hall to adopt a protocol to acknowledge the Indigenous territories on which the City of Toronto sits. While it was an important and historic turn of events that brought me out of the MUSKRAT office, what made it even stranger was that in order to do it, I had to push my way through the insane media circus that follows Mayor Rob Ford.

Acknowledging traditional territories is an accepted protocol within Indigenous communities. It is a show of respect that honours the relationship between Indigenous communities who have been living and working on this land from time immemorial* and also serves to locate oneself in their relationship to the land. Indigenous and non-Indigenous public honouring of Indigenous territories has already been an entrenched protocol in western Canada for over a decade, however Ontario and Toronto have been slow to catch up.

In January 2014, City Councillor Kristyn Wong-Tam, proposed a protocol to acknowledge Indigenous territory during the opening ceremony at City Council meetings. The suggestion became an item after it was reintroduced in February, by Co-Chair of the Aboriginal Affairs Committee, City Councillor Mike Layton (a committee that he battled Rob Ford to keep). Idle No More Toronto got wind via ally Miguel Avila-Velarde who, as an activist, is a City Hall monitor and reports to various grassroots individuals and organizations on issues that are of note or concern taking place within City Council.

Since that time, members of Idle No More Toronto have been consulting with clan mothers and council members from the Six Nations Reserve for advice on how City Council can be inclusive of First Nations’ from this region. While the Anishinabek Nation were established in the territory known as Toronto at the time of Contact, their community known today as the Mississaugas of the New Credit (MNC), other Indigenous nations such as the Haudenosaunee, and the Hurons also occupied the territories at various points of pre-contact history.*(Download the First Story App to learn about the rich Aboriginal History of Toronto). On Oct. 8, 2010 the Government of Canada settled the Toronto Purchase Specific Claim with the MNC First Nation. This claim was based on events that took place in 1805 and that led to the unlawful surrender of land covering most of present day Toronto.

Councillor Layton said that while he recognizes that there are several First Nations who have traditional ties to the land known as Toronto, he is relying on the community for guidance in the protocol. “I am looking for advice from the Aboriginal Affairs Committee as to what the wording will be – I’ve spoken with Chief LaForme of the Mississaugas of New Credit and the initial advice is to keep it very standard and simple. I am open to it being anything, but again, it’s a very formal process. I am hoping it will be before or after the National Anthem is sung. We want to find something that is meaningful and respectful”. While Idle No More and community are still in the consulting stages for protocol to approach this issue, City Council ploughs forward, and on March 19, 2014 the item was on the Executive Committee agenda.

A message about the agenda item on Executive Committee meeting went out late the night before, and I got it when I arrived at the office on the day of the meeting. Miguel Avila-Velarde was on the agenda as a deputant to speak about the issue, and since nobody was able to attend with Miguel, I shuffled my schedule around, and hustled down to City Hall. As I arrived in the lobby, I came face to face with the now infamous Rob Ford bodyguard, Mike Toolaram.

Earlier that day I had caught a glimpse of a news headline, something about a revelation around Rob Ford’s crack video, and when Miguel texted that he was in Committee Room One, I found it immediately thanks to the massive media scrum outside the door. I recognized a few of the journalists, and I overheard one in particular who was apparently reporting live, that Rob Ford was taking a phone call. The media was blocking the door, and I hesitated for a moment before I pushed my way through cameras, photographers and microphones to find that the Committee had just called the agenda item.

Out of breath and feeling somewhat frazzled, I introduced myself and my clan in the language. “She:kon. Wa’tkonnonhwera:ton’ Jamaias ni yukyuts, wakhskare:wake Kanienke’haka Kwe, Onkwehonkwe Kwe.” I translated and asked them to consider acknowledging Toronto as Indigenous territory during the opening ceremony of City Council meetings. It was a very full and distracted room of City Council members and Rob Ford sitting across from me, who appeared to be completely disengaged (not to mention red faced and sweaty). At one point (I couldn’t help myself), I remarked that it seemed the Mayor was not listening, and I hoped that other City Councillors were listening, to which I was instructed by the Deputy Mayor Norm Kelly to address the Chair (himself). I concluded, and Miguel added that while he was a guest to this land, that I represented the many generations of people whose history has been denied.

Once the Chair thanked us, Councillor Michael Thompson asked the City Manager if the recognition of First Nations would be happening or not, that he thought it was something they had already discussed, and he also noted that he has seen this happen in other areas across Canada. The City Manager responded that no, there has not been a specific motion adopted at this time, but if the Chair wants to move on it, it would be appropriate for a report to come forward to City Council for a formal review. The Chair called for all those in favour of the referral, to which only several hands were raised, and then he asked for all those in favor of opposed (to which I was confused by the language). I could be mistaken, but it seemed as though the same hands were raised, but he concluded by saying “that’s carried.” And we were done.

I spoke with both City Councillors Mike Layton and Kristyn Wong-Tam that afternoon, each of whom expressed strong feelings that this motion be passed through City Council. Councillor Wong-Tam seemed confident that the protocol would be accepted: “It shouldn’t be a contentious issue, it can just be a gentle acknowledgement during opening ceremony. I am hoping they will wisely accept the recommendation that we open all of our meetings with this acknowledgement. People should just adopt this as protocol. When I go into community, this is how it’s done.” Wong Tam is correct, at an Idle No More Guelph event attended by MUSKRAT earlier in the week, a member of the Ontario Public Interest Research Group (OPIRG) at the University of Guelph noted that the biggest change she had witnessed since Idle No More was sparked over a year ago is that it is becoming common place to acknowledge and honour Indigenous territories at public events.

The Rob Ford media circus that had blocked my way into the Executive Committee room earlier that day eventually subsided, and in an even stranger twist, later on that evening, Rob Ford (along with his Body Guard) became the first Mayor to attend the Miziwe Biik Aboriginal Employment and Training Corporations’ annual Toronto Aboriginal Business Awards (TABA).

The following day On March 20th, at the City Hall opening ceremony, after the National Anthem, Councillor Layton stood up and encouraged City Councillors to acknowledge they were meeting on traditional First Nation land; the item was received -for information- by the Speaker of the Council. It remains to be seen what will happen next. Since the recommendation sits with the City Manager, now is the time for the community to make their voices heard to their City Councillors that there needs to be a formal acknowledgement of Indigenous people and history within the municipal government of what is now known as Toronto.

*Download the First Story App to learn about the rich Aboriginal History of Toronto. 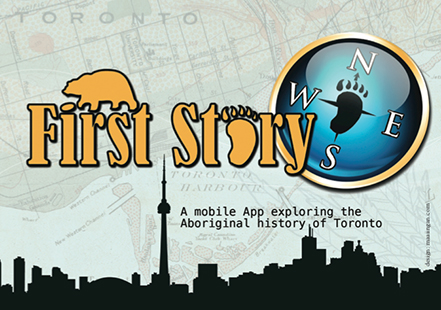 ·        Acknowledging territory is a way of honouring and showing respect for a group of people who have been living and working on this land from time immemorial.

·        The only people who would Welcome to the Territory are the First Nations people who are traditionally/originally from that territory. The majority of school district personnel likely would Acknowledge Territory.

·        Acknowledging territory is performed at any important function such as a school assembly, awards night, graduation, a celebration including Aboriginal communities etc. It can also be performed before an important meeting or presentation.

·        Acknowledgement/Welcome is usually the first item on the agenda. (If you forget, just quickly acknowledge then, and don’t worry about it!)

·        For larger events it is always respectful to have a member of the local First Nation, preferably an Elder, perform a welcome, if possible. This would require an honorarium to be given to this person, to acknowledge his or her knowledge and respect within the community.

·        Seek out the name of the traditional territory you will be on, if you are travelling to speak and work with people.

Welcome everyone and thank you for being here. I would like to acknowledge that we are on the traditional territory of the ____________________ First Nation.

The introduction is flexible, please introduce and welcome people as you naturally would, the important part in this protocol is the second sentence. Even this though, can be worded in such a way as to be most natural for you.