SAMAYA Entertainment is proud to share the Talented Artists that have been making waves across the Country, and fascinating audiences on stages to diverse audiences!:

JOEY STYLEZ An award winning singer-songwriter, rapper, activist, visual artist and fashion designer. His debut studio album The Blackstar was released in 2009, earning him a JUNO nomination and three Aboriginal Peoples Choice Music Awards. In 2013, CBC listed Joey Stylez as one of the Top 25 Rappers of All Time in Canada. Winner of the 2017 BEST HIP HOP/RAP ALBUM at the Indigenous Music Awards. www.joeystylez.com

DANI & LIZZY This Vancouver Duo breakthrough came in 2013, when a simple video of Lizzy singing in front of her computer went viral. The song was “Dancing in the Sky,” a soulful vocal tribute to some close friends who they had lost over a period of time, and its message of hope continues to spread, with 12 million YouTube views and counting. Signed with 604 Records their Debut Album WORK OF HEART has created a movement like no other! www.daniandlizzy.com

SUZETTE AMAYA Kwakwak wakw, Cree, Nisga and Coast Salish Ancestry. Born and raised in East Vancouver, is the Producer/Radio Host for ThinkNDN 100.5fm CFRO. As Seen on SLICE TV – Big Brother Canada Season 1 Houseguest and Cast Member of APTN – Back In The Day On The Mighty Fraser. This Indigenous Personality has been touring extensively across the Nation, Facilitating Workshops, being an Emcee, Panel Moderator, Freelance Publicist, Music Curator and Keynote. www.suzetteamaya.com

CARSEN GRAY Hailing from Haida Gwaii, BC . Carsen Gray is Haida and mixed descent. Winner of the 2017 Indigenous Music Awards for the Category of BEST NEW ARTIST presented by SiriusXM and nominee for BEST POP ALBUM, BEST RADIO SINGLE – For Supernatural” . In 2016 Following the debut release of singles/videos, “Supernatural” and “Return Again” , Carsen Gray released her latest single/video “Wanna See You”, in collaboration with Juno Award-winning Artist, DJ Shub and featured on her Self titled DebutAlbum. www.carsengray.com

NISKA NAPOLEON A nomadic soul, from mountainous valleys, beach fronts, and urban city skylights, Niska Napoleon is a Vancouverite becoming a force in the indie music scene. Niska has been highlighted on “The Midday Show,” “Breakfast Television,” “MY TV,” “The New Canoe,” “The Mix”, CBC Radio and APTN’s “Moosemeat & Marmalade” and “Mohawk Girls”, catching the attention of audiences and media alike. With a recent performance on APTN Aboriginal Day Live 2017. www.niskanapoleon.com

MAMARUDEGYAL Hailing from Calgary AB, residing in Burnaby, BC. Mamarudegyal represents many demographics and strives to strengthen her Community Voice enough to make change in today’s world. She is motivated by injustice, and inspired by Diversity. Her lifetime’s Creative scale has been devoted to Dance, to Emceeing, to Graffiti, Rap/Hip Hop, R&B and Soul. rudegang.wixsite.com/mamaempress

HOPE A Hip-Hop artist and performer from Leq’a:mel First Nation British Columbia. Inspired by Tradition, Hope uses the art of storytelling and rhyme to depict life on the reservation and illustrate to others what it is to be indigenous. For Hope, the first step before expression of freedom through voice is freedom through writing. Mastery in this art form comes through the convergence of story-telling and rhyme, but that is only the beginning. The creative challenge deepens with the added elements of incorporating current events and translating his reality into his music for a wide audience of listeners. hopefromsks.wixsite.com/hopefromsks

DJ VIZUAL Originating from El Salvador, this long time east Vancouver resident has been apart of the Indigenous Music Industry since 2003, Owner of SAMAYA Ent. Stanley Amaya has been Producing Club shows, Special events and Fundraisers in BC, creating a platform for Indigenous Artists. Co-Producer of ThinkNDN100.5fm CFRO, Stan debut his DJ skills in 2017 at the Talking Stick Festival, DJ Stan is a Video DJ playing Top 40, Old School, Hip Hop and Music By Indigenous Artists. meeting the requests of his audience. DJ Stan has brought joy to many Indigenous Communities with Video Dance Parties for all ages.

SAMAYA Entertainment is proud to be working with these diversely talented Artists, and are ready to share their music/videos with the world! For Media inquiries and Bookings please contact Suzette Amaya at 604-401-3641 Email: suzetteamaya@gmail.com 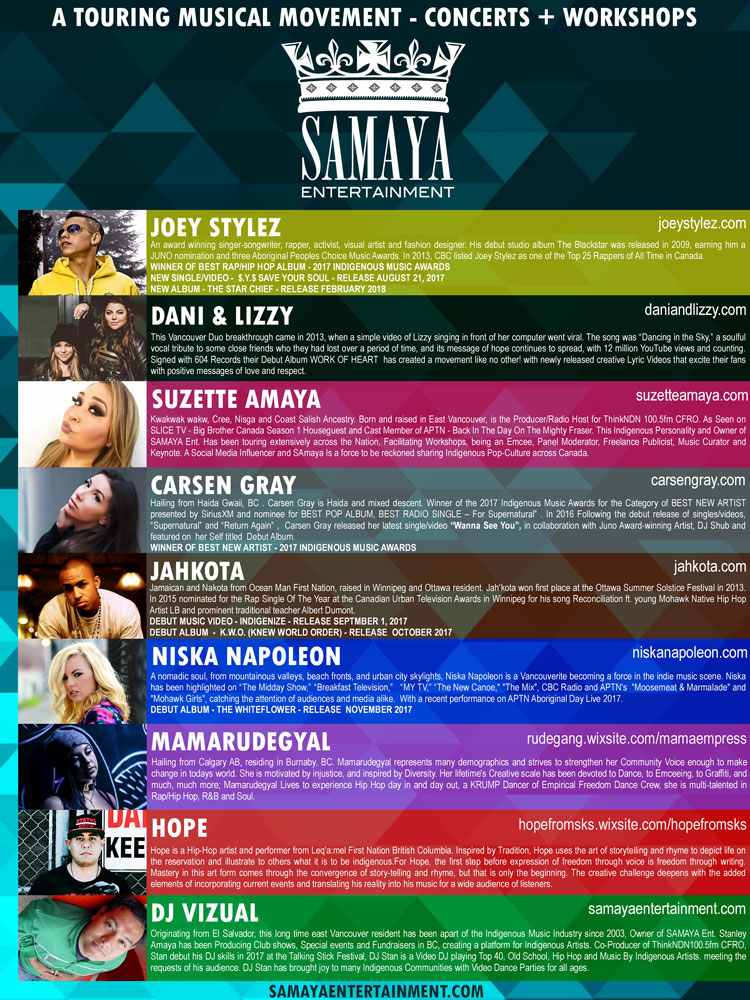