..when I see objects behind glass, [I ask] “are they filling their function, or purpose? Are they living their life”?

The MUSKRAT team recently made a trip to Montréal for the Aboriginal Curatorial Collective (ACC) Colloquium iakwé:iahre / we remember (October 16-18, 2014). The Colloquiam deconstructed historic and current Eurocentric archival approaches, and examined Indigenous techniques to housing Indigenous art and cultural objects. New York based Anishinaabe performance artist, Maria Hupfield was invited by the ACC and the McCord Museum to offer an Indigenous lens on the permanent exhibit, Wearing Our Identity, The First Peoples Collection.

Maria transformed into a tour guide and she navigated close to 100 audience members to join hands and enter the gallery together. A single undulating line of mainly Indigenous artists, researchers and curators weaved their way through and around the exhibition. The usually static and somewhat sterile space became animated with the anticipation of the audience.

The large glass cases and narrow gallery meant people had to cluster together which made for an intimate exchange between the audience and artist. With our hands interlocked I noticed that several people were round dancing yet there was no drum or singing, just the sound of feet shuffling and the strange quiet hush of a large group of people moving through the museum gallery. 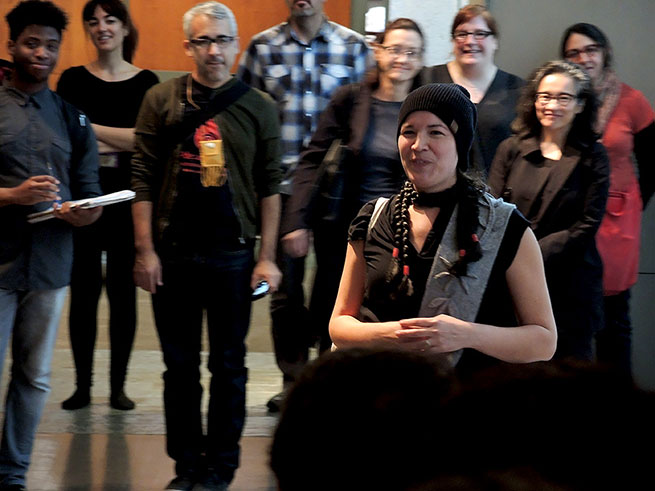 Maria called on ACC member Nadia Myer to point out her favourite piece in the exhibit – the Indian Act. Maria stood in front of a projection scroll of the Indian Act, pulling yards of yellow surveyors tape out of a felt bag she was wearing.

Later, Maria knelt in front of a glass case and blew into a whistle. Two museum employees appeared and slowly began to unlock a glass case, and Maria proceeded to remove items and replace them with other items in her bag. At one point she took out quill boxes and passed them around the audience.

I spoke with Maria following the performance: 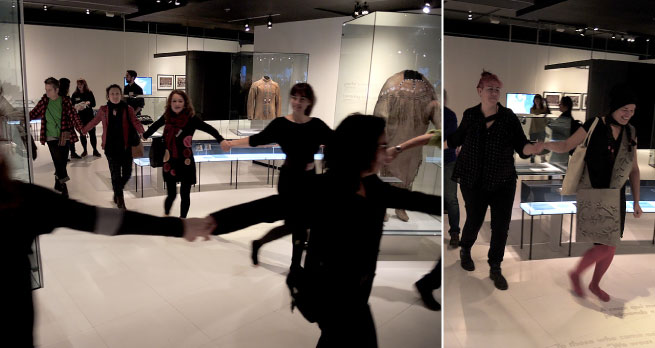 MM: You just finished your performance piece, can you talk about the entrance into the space? It kind of reminded me of a round dance.

MH: Yeah!! Yeah!! I just wanted us to all go in together, and think about how we enter a space. Every space we’re in is codified in different ways. How do you function in those spaces? For me, so many institutions where these collections are held are not about the people, they’re about preserving the work. So how do you make what’s behind the glass part of something you can identify with? Not just something in the past, but how can you start to forge different connections? Not everyone has an Auntie Audrey who makes quill boxes so how do you begin to connect with those things? In my own work, I work a lot with objects, I make objects and then I use them in performance, so for me, that’s part of it. So when I see objects behind glass, I’m like are they filling their function, or purpose? Are they living their life? 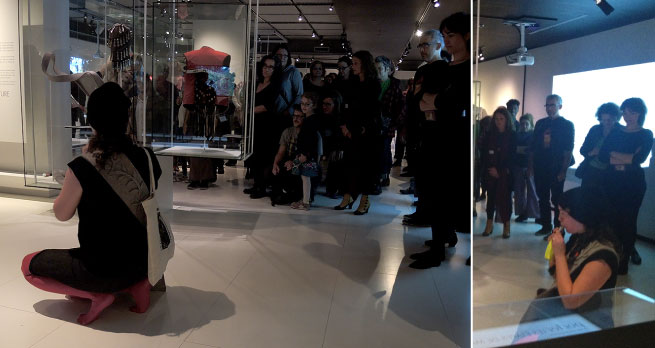 MM: I really felt there was kind of a ceremony leading into the opening of the glass case. Not that it felt like a reverent moment where we couldn’t or shouldn’t be there with you, but the way you approached the glass case, performative yes, but also ceremonial with the whistle calling to the objects.

MH: When I go into a space where there is all that work- those are other artists’work. So for me, I’m just really waking up my work that’s in there too. Anything I’ve done in this performance isn’t anything I would not normally do in other contexts, but the space codifies in very different ways.

In my work in general I am very conscious it’s not a ceremony. It’s not entertainment, I’m not there to entertain anyone. It’s art. It’s another language, a visual embodied language. I’m attracted to that because of things in my life that probably do come from cultural experience. We can always occupy spaces however we want, but to me I wasn’t like, this is sacred. I’m an artist and I’m a part of a system where I live in Brooklyn and I sell my work. So what am I going to sell? I’m not going to sell my cultural eagle feather you know, my sacred things, my personal things that help me be balanced. And I don’t go into a gallery trying to give anyone else that, that’s not my job—I’m an artist. 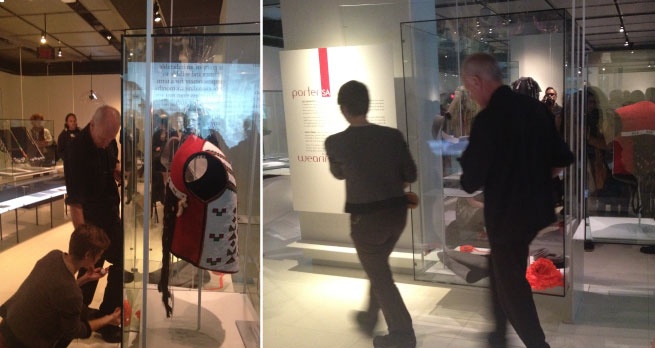 MM: The opening of the glass case was powerful, can you talk a bit about that?

MH: To me, it was really something to see them open the case. To have access. And who’s stuff is that? Who’s taking care of what for who? and do we have access? It’s really simple; I wanted all of us to see a case get opened. Just that could be the performance, right? Let’s just go around and open all the cases. 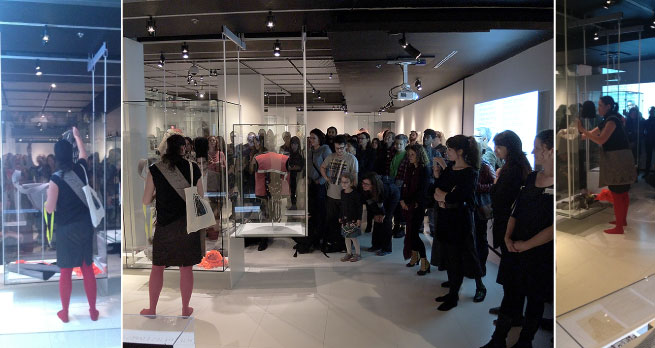 MM: Can you talk about the surveyors tape and standing in front of the Indian Act? With the yellow tape, it made me think of missing and murdered Indigenous women, though I tend to politicize everything. Also the Indian Act; I was thinking of bureaucracy.

MH: I’ve used the surveyors tape a lot, and in different colours. This time it was yellow, originally I was thinking orange. I wanted pink, but I went with yellow for a lot of reasons. Yellow can be lots of things, it can be caution tape. To me it was about being in the East, starting a new day. That action I’ve never done in front of the Indian Act so for me I want to try that out, and [question] what do we think of that? Then when you see me do that action in a different performance maybe it’s about another issue or maybe it’s not about an issue at all.

Living in New York, there’s also missing and murdered women of colour, and trans[gender] people, and it’s all systematic. I don’t necessarily think it’s specific to Native women. I mean, I am a Native woman, and of course, there’s an element of that, absolutely.

Generally with the performance I’m trying to open it up to a larger conversation. So, by using materials that are not so overt, it opens it up for other people.

I think with that tape there’s a sense of accumulation, passage. I’m also drawing in the space, sculpturally with the line, it’s an interesting visual, it’s something I can build up, you know, and am working through. 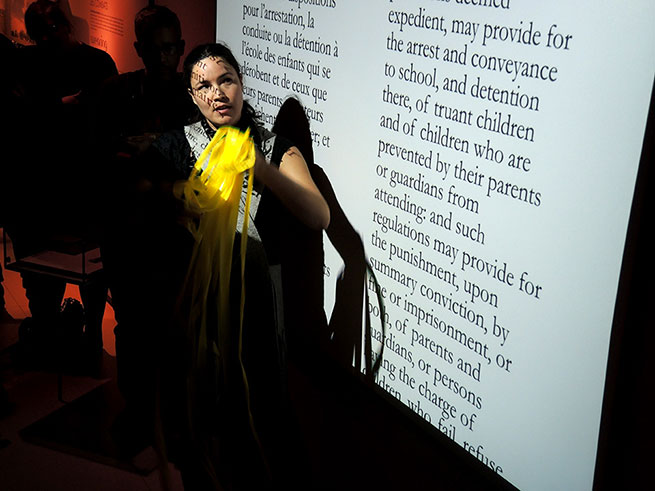 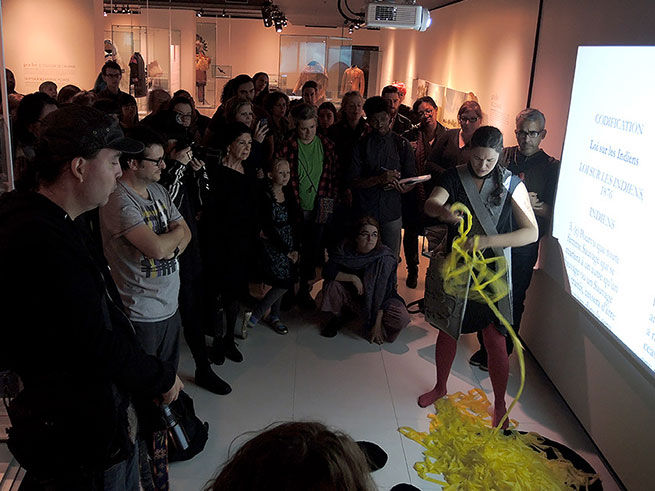 MM: It makes me think of what happened while you were doing the Indian Act part of the performance. A woman sat down on your jingle blanket which was resting on top of a glass case displaying a very old traditional garment inside it. Another audience member pointed out to the woman that your jingle blanket was your art work and part of the performance and that she should move. The woman was vissibly annoyed. Observing the interaction made me wonder had she been in a non-Indigenous part of the gallery, would she have felt that entitlement to sit on a glass case? I was watching how you were interacting with the various pieces and I thought, maybe it’s not so terrible. My immediate response was to protect the blanket, you know, protect the jingles.

MH: Right and that’s also the space we’re in so how do you handle things? I mean for me it was a bigger deal to decide to put the blanket on top of this dress, to open up that dress, to cover something and then how do we expose it, I mean these pieces are very connected. This was the first time I’ve activated that. Woken that blanket up in such an aggressive way; with two people, so even the jingles settled differently.

It’s tough because what happens when you go into a space that is codified in a way that we all know the language and a performance changes that code? I mean I did a performance where the alarms were going off the whole time. And there were so many of us in there, and I loved it, because it was like, our bodies are setting off alarms! This space is not for us. But we are here. And so alarms are going to go off, and I thought we’re going to carry through, and it’ll be part of the performance. My art work wouldn’t regularly be out in that way in the space. But you know I’m there and I have certain knowledge that I’m putting this out and things may happen. I may do something to it. 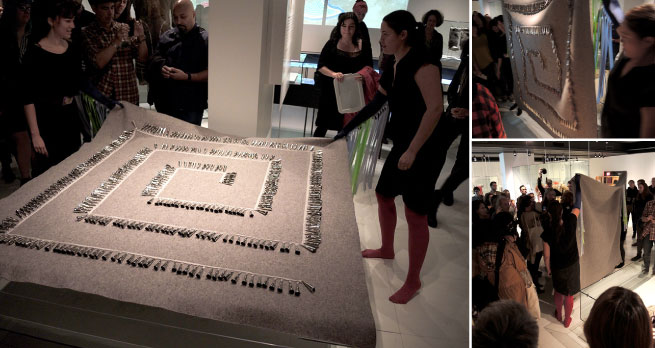 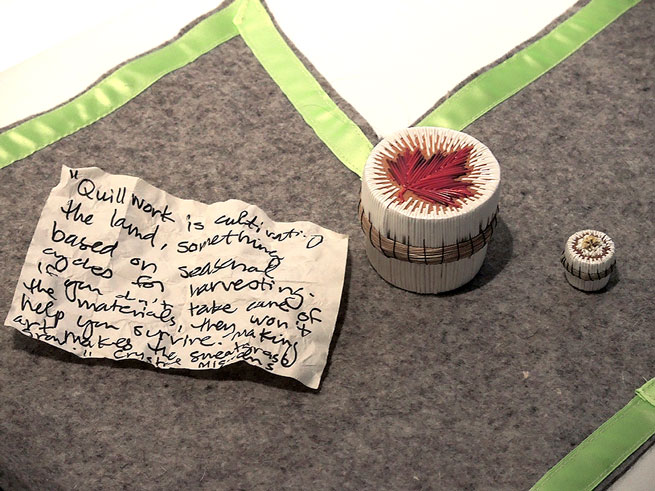 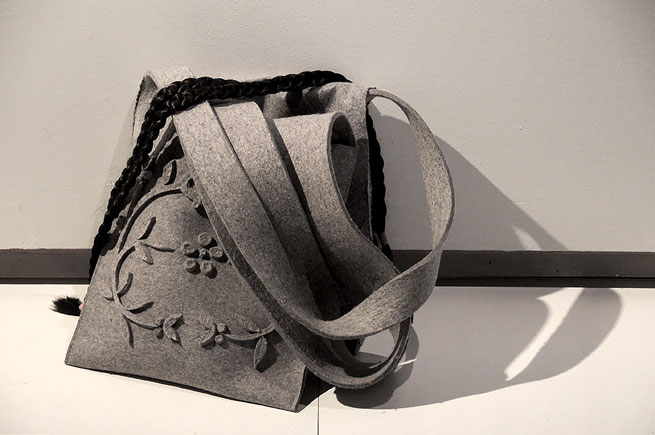 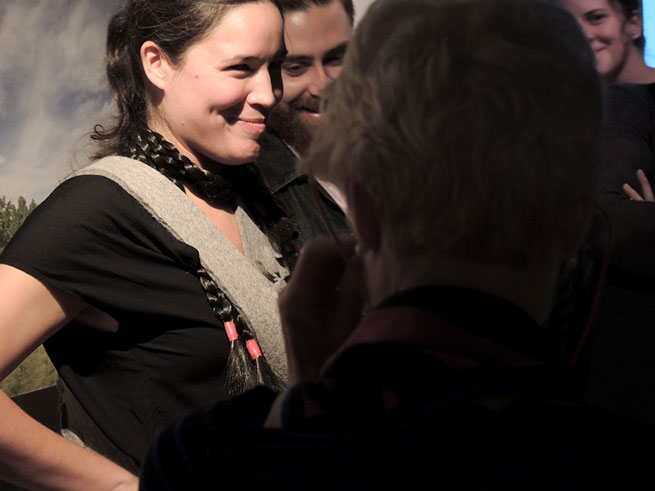 Maria Hupfield is currently based in Brooklyn, NY and is a member of Wasauksing First Nation, Ontario. She is a recipient of the 2013 Joan Mitchell Foundation Painters and Sculptors Grant, and has show at the New York Museum of Art and Design, Vancouver Art Gallery, and the 7a*11d International Performance Festival in Toronto. She is a participant in the 2014 AIM Program Bronx Museum and Winter Workspace Program Glyndor Gallery Wave Hill 2013. Her three-part performance intervention “Artist Tour Guide” was originally commissioned by the Smithsonian National Museum of the American Indian (NYC). Maria Hupfield is a graduate of York University (MFA 2004) and is represented by Galerie Hughes Charbonneau in Montreal.