Born at Shawanaga First Nation, Pegahmagabow was the most highly-decorated First Nations soldier in Canadian history, and this will be the first life-sized monument to honour his heroic service. It will be located at the Charles W. Stockey Centre for the Performing Arts in Parry Sound, Ontario, overlooking Wasauksing First Nation (Parry Island), where Pegahmagabow lived his adult years. Created by Tyler Fauvelle, a Sudbury-based sculptor (www.tylerfauvelle.ca), the bronze will be unveiled on National Aboriginal Day, June 21, 2016.

“The monument will feature three sculptures – one of Pegahmagabow in his Canadian Expeditionary Force uniform, an eagle, and a caribou,” said Fauvelle. “The caribou represents his clan. The eagle is a symbol of foresight, and a sign of the Thunderbird. Francis Pegahmagabow, who fought for almost the entire war and survived the horrors of Ypres, the Somme, and Passchendaele, had a strong sense of spiritual protection.” 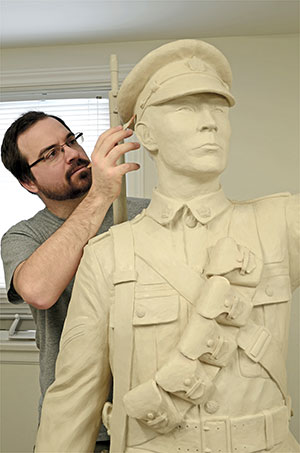 Fauvelle said that the first two figures are now at an Ontario foundry for bronze casting.

The project leader is ONECA. Roger Chum, President of ONECA, said: “We just passed the $100,000 milestone in cash and pledges. The Department of Canadian Heritage is contributing about half the cost of the project. People have been so generous, and we’re grateful for their donations. We hope to raise the final $60,000 by March.”

“In this centenary of the Great War, we’re asking Canadians to remember Aboriginal peoples’ military service, and help us honour this legendary Anishinaabe hero.”

In a complementary initiative, ONECA is also working to fund and produce an educational video and three learning modules that will be accessible to teachers to help them teach the history of Indigenous people, and the important role they played in military service.

Pegahmagabow continued to fight when he came home, but this time the enemy was oppression and racism. Fueled by pride in his Great War accomplishments, Pegahmagabow persistently agitated for change. He twice served as Chief of the Parry Island Band (Wasauksing First Nation), and as Supreme Chief of the National Indian Government, an early Aboriginal political organization.

Suffering from lung damage caused by chlorine gas during the war, Francis Pegahmagabow died in 1952.
Donations can be made by cheque payable to “Parry Island Hero”, and sent to ONECA, P.O. Box 220, 37 A Reserve Road, Naughton, Ontario, P0M 2M0, or online (via Pay Pal) at www.oneca.com.