Glimpses into Neoliberal Apartheid in the Cape.

Thanks to the work of Shirley Walters of the University of the Western Cape (UWC), Carol Lynne D’Arcangelis and I were invited to participate in a UWC colloquium on feminist popular education in Cape Town, South Africa on Oct 8th, 2012. We presented on the concept of decolonizing solidarity and our work in No More Silence as Indigenous women and settler allies to raise awareness about our missing and murdered Indigenous sisters.

Most folks we talked to had little knowledge of the current reality of Indigenous peoples on Turtle Island, that apartheid legislation (i.e., the Indian Act) exists in Canada, or that Native women experience higher levels of violence and murder.

We told people about Canada’s current Truth and Reconciliation Commission (TRC) which came as a surprise to most. South Africa’s own TRC (established in the early days after the official abolishment of apartheid in 1994) was a point of non-discussion. In the South African model, amnesty was granted to perpetrators who came forward and confessed crimes, but this included both the apartheid regime and the liberation movement placing all parties on a kind of morally equal playing field. No one was ever charged and no real healing, reconciliation or restoration came of it and the high hopes of the early years fell to disillusionment. 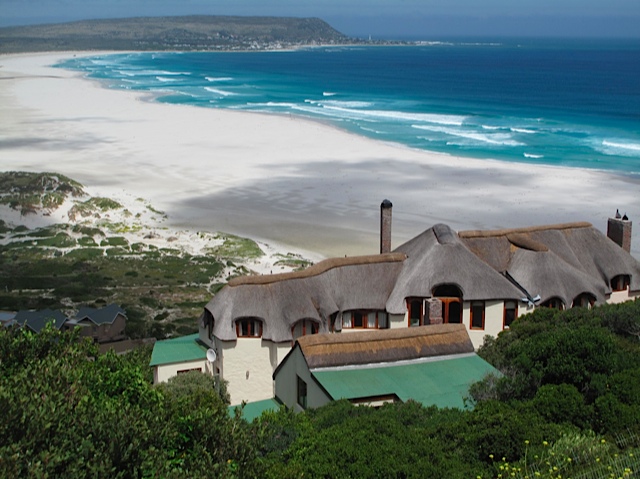 The Cape is full of contradictions. We found ourselves enveloped in the stunning beauty of the land while shocked by the opulence of many predominantly white neighborhoods in relation to the extreme poverty of the so-called coloured and black areas. 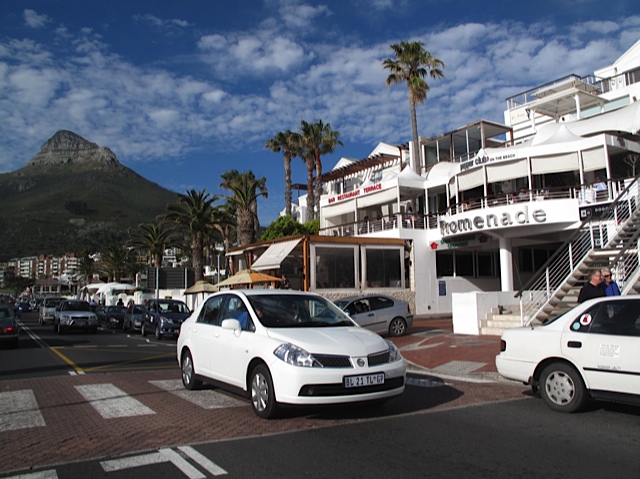 Some of the wealthiest people in the world live in South Africa, and there is still physical and economic segregation along racial lines.

According to many of the people we spoke with, apartheid remains despite being officially abolished. According to Lenny from ILRIG (International Labour Research and Information Group)) “the same white elite holds power – it’s just gotten a little grayer.”

In fact, a member of the ANC (African National Congress) National Executive Committee is a shareholder in the Lonim mine in Marikana where striking workers were massacred on August 16th, 2012 – a watershed moment some say – a sign not only of the corruption of regime and police, but also one that spurred the growth of a new social movement in the country.

With the change in the world situation – open markets and an ethos of settling conflicts in a way that would allow a new brand of neo-liberal capitalism to flourish – the old leaders of apartheid saw the opportunity to accumulate more wealth. This simply involved a slight tweaking of a system that had been working to their advantage for decades, which was based on forced migrant labor functioning through racialized and gendered oppression.

Colleen, a powerful and informed woman of Khoi descent, travelled with us for a few days and introduced us to women activists in the Cape Flats – the extensive flatlands where the majority of the population, the so-called coloured and black people, live. Our visits began with an orientation into the complexities of the apartheid legacy. Colleen spoke to the trauma of bureaucratic racialization where 18 race categories were employed. We learned about the ‘pencil test’ to determine lack of whiteness, i.e., if a pencil stayed in your hair you were a type of coloured or black person. Women’s nipples had to be pink not brown to qualify for the category of white.

Eleanor invited us to her home at an informal settlement in Grassy Park (Cape Flats). After having experienced several evictions and forced removals in her life, Eleanor and the 43 families that live here today are determined to stay. These 43 families live in shacks with no electricity or running water and share four toilets that work on a bucket system (municipal workers come to clean out the outhouses manually). 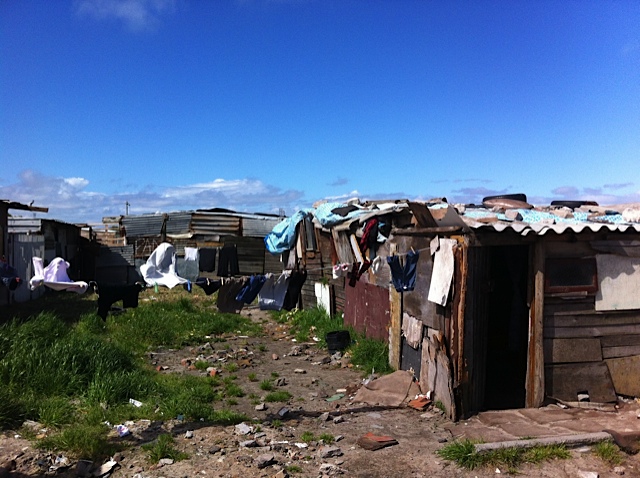 In one photo, Eleanor is pointing at a school and field track that she says the municipality is using as an excuse to raze the settlement. She says the track in fact is hardly used and doesn’t understand why, if it’s really for the community, they can’t benefit from it too. 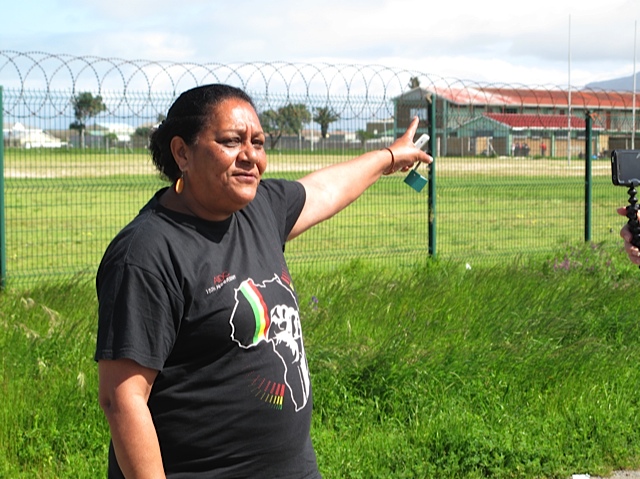 Drug abuse, especially amongst the youth, abounds in the Flats with up to 60% using tuck (crystal meth). Eleanor’s settlement does not allow anyone who is dealing to stay, nor is the operation of a Shebeen (booze can) accepted.

Auntie Evie (on the left in this photo) was born on a farm under slave labor conditions. Pesticides almost killed her and her baby. As a result, she now confronts farm owners on their properties and has been successful in a few cases at getting them to provide protective gear for workers. The tears came as Auntie Evie recounted witnessing her mother’s near death at the hands of an alcoholic and abusive father one Christmas eve. We then learned that for many years workers were paid according to the Tot (Dop) System – wine in exchange for labor—creating an alcohol-dependent work force.

Khayelitsha with its population of 800,000 to one million was mind-boggling; the residents live with no or sporadic electricity, sharing one toilet amongst 40 to 60 families and carrying their water in jugs over long distances. 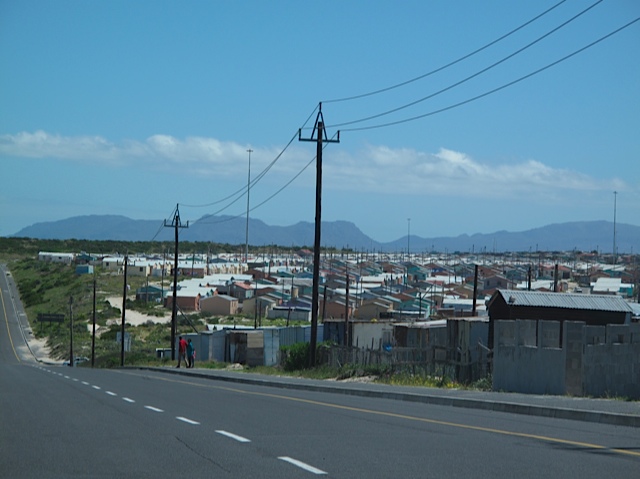 The rape and murder of women, two-spirit people and children are rampant here as well as random violence and mob justice.

At Grannies against Poverty and Aids (GAPA) we met Vivienne who organizes with grandmothers taking care of AIDS orphans.

Vivienne talked about the normalization of violence in the townships. She spoke of a girl who was murdered in front of her 4 year-old daughter. Her killer walks free.

We learned that new forms of patriarchal violence masked as conservative traditionalism are gaining ground; the so-called corrective rape of two-spirited women and stripping of women wearing mini-skirts. Vivienne is defiant of the chiefs who tell her to cover up and is speaking out against a new bill designed to afford more power to men in the guise of customary law.

South African Household Survey and Police Stats: On in every three women in South Africa is in an abusive relationship. A woman is killed by her partner every six days and there is a rape every 35 seconds. My Dream is to be Bold: Our Work to End Patriarchy, Pambazuka Press.

Overwhelmed and holding feelings of pain and inspiration simultaneously, we spent our last days in South Africa hiking a 30-km trek around Cape Point.

We walked south along False Bay (Indian Ocean coast) until we reached our lonely overnight hut with views of both the Atlantic and Indian Oceans.

Often wondering if we were really there or if it was a dream, we soaked up the beauty and allowed our impressions to settle.

A host of critters shared our path:lizards, babbons, bontebok, an African antelope and ostriches. And the turtle who reminded me of home and to give thanks to the Khoi-San peoples for this amazing journey to their land.

Title graphic courtesy of: Women Weavers of The Kraal Gallery

Audrey Huntley is a wanderer, storyteller, documentary filmmaker, community researcher and writer/producer of mixed European settler and Indigenous (Anishnawbe) ancestry. She grew up in Calgary, Alberta, and moved to Europe as a young adult. Audrey has a Masters in Political Sciences from the Philipps University of Marburg, Germany. Audrey has been doing community based research in Indigenous communities in BC and Ontario since 1998. Her documentary about Norma George, an Indigenous woman from Takla Landing who was murdered and dumped on the outskirts of Vancouver, Go Home, Baby Girl (2005) aired nationally on CBC television in addition to Letters from Caledonia/Six Nations (2006) (11min) and Mohawk Smokes (2006) (12 min). Produced independently by WolfDogProductions A Warrior-Woman’s Journey: From Six Nations to Oaxaca (26 min) screened at ImagineNative 2008. Audrey has authored several reports as well as a book in German Writing Resistance: The Discourse of Decolonization in Native Women’s Writing (1996) Audrey is currently based in Toronto, ON.