The Joseph Jenkins Roberts Center at Norfolk State University (NSU) held a conference called 1619: The Making of America in September of 2013. That year is historically significant because it was the first year Africans were brought to the colonies, slavery was born and it was the year America’s first legislative body was founded.

In an admirable gesture to honor all of the cultural relations happening in the America’s in 1619, NSU hosted several Native speakers and those familiar with Native history to address many issues not often covered in today’s classrooms. During these sessions, many little known facts about African Americans, Native Americans and slavery were addressed in the years following 1619.

The Term Negro May Have Been Meant For American Indians

During the session Native Americans at 1619 Dr. Arica Coleman, an assistant professor at the University of Delaware who is of Rappahannock and African American descent, discussed how the term negro might actually be referring to an American Indian.

According to her 2013 book, That the Blood Stay Pure, the term’s origins can be traced to medieval Italy where it was a classification of a skin color, not race. Additionally, Europeans often referred to indigenous populations of their communities as negroes. In the Portuguese colony of Brazil, Indians were called negros da terra meaning negroes of the land.

Coleman pointed out during the conference that the early Virginia legislature identified Moors and negroes separately. There is also documentation in which individuals were described as “Negro African.” Coleman questioned why the two words would be used to describe an African person and suggested the Native meaning as a strong possibility.

Dr. Coleman also asserts the year 1619 isn’t entirely correct regarding the first arrival of blacks to America. She notes “negroes” accompanied Spanish North American expeditions a century before the English arrived in Virginia.
She also cites evidence of cohabitation with aborigines in the early 17th century. She says that in 1603, seven negroes escaped from St. Augustine, maintained their freedom and married Indian women.

Chief Lynette Allston, of the Nottoway Indian Tribe of Virginia, discussed Native America on the Hit List: Traditions, Culture, and Identity at the conference.

Allston shared that in October of 1665, according to Hening’s Statutes at Large—the laws of Virginia—if an Englishman was murdered, the closest Indian town would be held accountable for the crime.
When authorities in 1680 assumed Nansiatticos had committed a murder, they reenacted Hening’s Statutes and ordered all children under 12 be indentured to the English as servants until the age of 24. The Indians were forbidden to return home, or they “shall be Transported beyond Sea to England or Some of the Islands and there bound or Sold for Seven Years….”

Natives in Virginia Were Part African, Exported Cotton and Were Valued Members of Society

Vouching for the legitimacy of the Nottoway Tribe, Dr. Buck Woodard, a cultural anthropologist who at the time was director of the American Indian Initiative for the Colonial Williamsburg Foundation and Historic Jamestowne, spoke about the “Nottoway Kinship, Marriage and Peoplehood in Southampton County, Virginia.”

Woodard said many Nottoway moved to New York with the Tuscarora in the 18th century, but some stayed in Southampton and intermarried with whites, and “free colored people.” The Nottoway town of Antebellum, he said, “became a series of ‘reservation farms’ in Virginia’s developing agro-industrial society, contributing to cotton, swine and vegetable markets of the region.”

Dr. Rebecca Hooker, assistant professor of English at Virginia Wesleyan College, who is of African American, English and Creek descent, spoke about how the racial mix of authors entering America affected literary culture. In the midst of contributions of African and European literary voices, a Native author came forward. He was a Tuscarora named David Cusick whose mission was to present the history of Six Nations’ people from their own perspective.
Cusick claimed he wrote his book Sketches of Ancient History of the Six Nations, (1827): An Iroquois Origin Story and A Challenge to the Western Historical Timeline because he “found the history involved with fables.” In his text, Cusick describes historical moments with specific dates that occur before recorded American history.

“Cusick was an author who inserted himself into the literary conversation in order to insist on the authority of Native nations to know their own history, and his writing challenges the idea that events not ‘discovered’ by whites and documented by independent observation or experimentation cannot be true,” Hooker said. 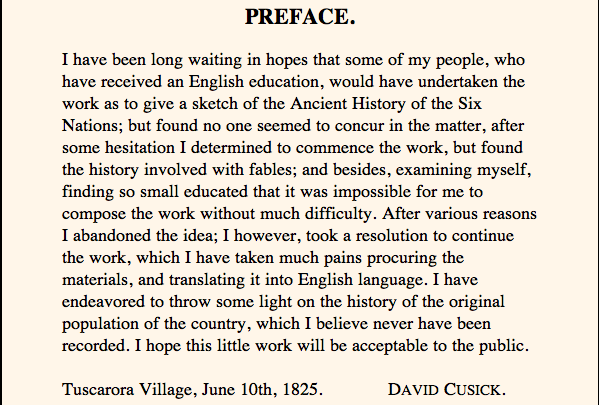 Indians Got Poison Not Peace at 1623 Negotiations

Allston also discussed a poisoning that took place at a meeting convened for the purpose of peace negotiations. The event is considered so historically egregious, it is now marked with a Virginia Department of Historic Resources Highway Marker near West Point.

The marker reads as follows: “In May 1623, Capt. William Tucker led soldiers from Jamestown to meet with Indian leaders here in Pamunkey Territory. The Indians were returning English prisoners taken in March 1622 during war leader Opechancanough’s orchestrated attacks on encroaching English settlements along the James River. At the meeting, the English called for a toast to seal the agreement, gave the Indians poisoned wine, and then fired upon them, injuring as many as 150, including Opechancanough and the chief of the Kiskiack. The English had hoped to assassinate Opechancanough, who was erroneously reported as having been slain: they succeeded in 1646.”

This story was originally published October 9, 2013 in Indian Country Today and has been updated. It was written by Vincent Schilling and republished with permission.