Tantoo Cardinal stars in Falls Around Her | Image source: tiff.net

Falls Around Her follows an Anishinaabe musician named Mary (Tantoo Cardinal) as she returns to her home community to rest and recharge after many years of touring internationally. Directed by Darlene Naponse (Anishinaabe), the film makes its cinematic debut at the Toronto International Film Festival on Sunday, September 9, 2018. It will mark Cardinal’s first starring role in a feature length film.

As one of the most recognizable Indigenous actresses in the world, Cardinal has made great strides not only in creating visibility for Indigenous women in cinema and theatre, but also as a mentor and role model. This year Cardinal will be honoured at TIFF with a Birks Diamond Tribute to the Year’s Women in Film and will also open the Industry Conference – a six-day engagement full of insightful discussions with compelling film industry leaders. As Cardinal prepares for the busy festival, she spoke candidly with MUSKRAT Staff Writer Erica Commanda about her role as Mary in Falls Around Her and the importance of supporting up and coming Indigenous filmmakers.

MM: With a well established successful acting career in both film and theatre, how does it feel landing your first starring role as Mary in Falls Around Her?

TC: It’s very exciting and almost surreal because I expected it to happen a lot sooner; but with the reality and atmosphere of our present [society]; it feels great and very exciting!

MM: What attracted you to take the role of Mary?

TC: I had worked with Darlene when she was doing her first feature film. I had seen her work and had a sense of where she was coming from in terms of story and her work in the medium of film as storytelling. When she proposed the idea I trusted that whatever she was going to write was something that I would be interested in, and the option was always there if it was something I felt I couldn’t do; I could just say: no, thanks. The ideas she expressed to me sounded completely and totally legit. I wanted to be a part of it.

Here is a young filmmaker who was well aware of my work for many years, so I was looking forward to that experience. It took about five years to get the opportunity to actually work on the story she was creating. She was sharing scripts as she went along. It was a complete copacetic type of situation.

MM: You started acting in 1970. What inspired you to get into acting?

TC: I didn’t like the way we were being portrayed in society, so I was just looking for a way that I could contribute to bringing the truth forward, or some semblance of the truth. It was from a place of rage that I got involved. Our image is being manipulated from a society that has no appreciation or understanding about who we really are.

I was trying to find out how it was that I could contribute something positive, or of value, or useful that would tell the truth of who we are. I wanted to bust them and tell on them. I was volunteering for all kinds of things to see what I would be good for. This was one of the things that paid my way when I was exploring options to find out how I may be able to contribute to some change.

MM: In your opinion, as a veteran in the film industry and as an Indigenous actress, why is good representation of diversity important?

TC: There are so many misconceptions, outright lies, and stories that are not true about our image and who we are. Our image has been maligned and manipulated for the purpose of keeping us in poverty and in a position of disadvantage for generations.
We got to do whatever we can to change that around completely on its head. It’s completely backwards and it shouldn’t be allowed. I’m happy with the way things are going now; there’s a lot of people now a days that are respectful and say: No! No! No! That’s not right!

MM: The film industry is making progress, although slowly, in regards to inclusivity of gender and race in film production. Now that you are a member of the Oscars Academy, what do you hope to contribute in order to promote a more inclusive industry going forward in that role?

TC: I think it would kind of depend. I suppose there will be opportunities to converse with people, and voting a certain position- although it’s just one vote. I also volunteered myself for a mentorship position for young filmmakers, so hopefully I will have the opportunity to support them which has really been a big part of my motion and my movement for many years. I do believe in supporting as many people and artists as we can to move forward and tell our own stories in a way that we need to tell them. Our societies have different values on many levels, including how our Elders are respected. It’s in the doctrine of who we are as people in our culture. [Indigenous people] have a lot to contribute as a society. 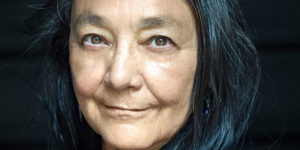 Tantoo Cardinal has appeared in over 120 film and television projects over the course of her 40-year career and has won numerous awards for her performances. Her recent feature films include Hard Powder (with Liam Neeson), Angelique’s Isle, Wind River, Through Black Spruce (also screening at TIFF 2018), The Corruption of the Divine, Maina, Chasing Shakespeare, Eden, and she recently wrapped the lead role in Falls Around Her. Her many other film credits include Legends of the Fall, Dances with Wolves, Black Robe, Loyalties, Luna: Spirit of the Whale, Unnatural & Accidental, and Loyalties. Her TV work has included recurring roles on the series Westworld, Longmire, Mohawk Girls, Arctic Air, North of 60, and Dr. Quinn Medicine Woman. Tantoo was recently awarded the Earle Grey Award, honouring her extensive contributions to Film and Television. She is also a Member of the Order of Canada, one of Canada’s highest civilian honours.

Previous : VIU SUPPORTED BUSINESS PROGRAM INSPIRES INDIGENOUS YOUTH
Next : A NEW EVOLUTION BY DON AMERO AND WHAT “LIVE WHILE I’M ALIVE” MEANS TO HIM