The low-budget movie has been presented in some of the biggest movie festivals around the globe and keeps on going!

When the movie “Le dep” was released earlier this year, no one could have predicted the repercutions it would have. With a small budget (230 000$), there’s only so much you can do. This is what makes the performance of the director Sonia Bonspille Boileau so amazing. The movie had it’s premiere at the Karlovy Vary International Film Festival, in Czech Republic, and few months later, it keeps on travelling, and touching the hearts of audiences from all around the world.

This weekend, the movie was presented at the American Indian Film Festival in San Francisco. Remarkably, “Le dep” was nominated in 5 categories! (Best actress, Best actor, Best movie, Best director and Best supporting actor). Finally the actress Eve Ringuette made the best impression on the jury, and won for the second time, the Best actress award (first time in 2012 for her performance in Mesnak). 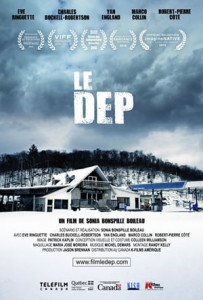 Le Dep is a psychological drama about Lydia, a young Innu woman who works at her father’s convenience store in a small First Nations community in rural Quebec. One night, as she prepares to close up shop, a masked robber enters the store and holds her at gunpoint. This traumatic experience becomes even more troubling when Lydia recognizes her assailant. Shortly after, she will have to make a decision that will forever change the course of her life.

As for now, the movie is available on Illico, Bell Tv, and online on Vimeo on demand at the following link: https://vimeo.com/ondemand/ledepenglish

Previous : FIRST STEPS: A NEW OPPORTUNITY FOR ARTISTS LOOKING TO GAIN EXPERIENCE TEACHING IN SCHOOLS AND COMMUNITIES
Next : AFN NATIONAL CHIEF PERRY BELLEGARDE SAYS UNIVERSITIES MUST PLAY A ROLE IN IMPLEMENTING THE TRUTH AND RECONCILIATION COMMISSION’S CALLS TO ACTION