Saul puts forward that Dictators like Mussolini would have been in envy of Harper and his government’s tactics.

As one of the very few Indigenous peoples in attendance in November at the Toronto book launch of John Ralston Saul’s new book the The Comeback, I came to a realization that Saul’s book fits within the genre of Indigenous Academia, but is not written for Indigenous peoples. This book is intended to educate the non-Indigenous people of Canada to start participating within our democratic process to bring forward an equal voice for all Canadians.

The Comeback is not about the Aboriginal peoples movement in Canada, it is the “Comeback” of a Canadian movement that includes voices of Aboriginal and non-Aboriginal Canadians. As Canadians, we need to respect each other and that also includes respecting Aboriginal Peoples’ Title and Treaty rights. A true democracy includes the voices of all.

Saul briefly talked about land claims and title within Canada and how the courts are bringing forth rulings that favour Aboriginal peoples’ rights and title to the land. First Nations governments and the Government of Canada spend billions of dollars in the courts arguing for and against retaining and regaining treaty rights; land rights for traditional and commercial uses; negotiating new treaties in regard to unceded territories; as well as upholding the Constitutional Rights of the Métis and Non-Status peoples. Does Canada itself lose land and title when Aboriginal communities win in the courts? No, because it is a unilateral transfer from one “Canadian” to another (that is if both non-Aboriginal and Aboriginal people view themselves as Canadians). The negotiation of rights can be done without spending billions of dollars in the courts and we would see more benefits in seeking out partnerships with one another rather than unilaterally imposed paternalism. 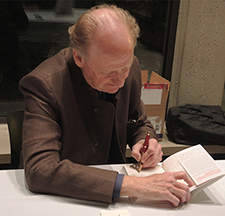 Saul mentioned the Idle No More movement and the Omnibus Bill C-45 the Harper Government put forward that started it all. Saul puts forward that dictators like Mussolini would have been in envy of Harper and his government’s tactics. A true democracy is one of debate, which is being ignored within the Harper Governments processes when dealing with Aboriginal Peoples and their rights.

The Comeback is a book that every Canadian should read. The book can assist in creating dialogue between Aboriginal and non-Aboriginal Canadians within a context that is clear and creates a happy medium for all Canadians to start the dialogue our government is ignoring. This seems to be John Ralston Saul’s guide to creating reconciliation in this Canada.

Previous : INDIGENOUS SOUNDTRACK FOR THE FRONTLINES
Next : TANTOO CARDINAL TO RECEIVE ACTRA TORONTO’S 2015 AWARD OF EXCELLENCE

Jonathon Potskin is Cree from the Sawridge First Nation and is Metis from Alberta. His passion for making the world a better place is shown through his work within different Indigenous organizations across Canada and in Australia. He completed a Bachelor of Arts at Concordia University College of Alberta, a Master of Arts in Anthropology from the Australian National University and a Certificate in Graphic Design for Print and Web from Humber College. Jonathon Grew up as a Metis Dancer and performed across Canada and the USA. Jonathon was chosen as a Role Model with the National Aboriginal Role Model Program through NAHO, which allowed him to speak to youth across Canada on Higher Education and Youth Leadership.