While it was beautiful to hear a smattering of Ojibway terms, and some reference to the lunar calendar in the passage of months, I found myself wanting a deeper, more resonant connection between these women, and the moon…

I’m scratching my head after watching The Unplugging. This intercultural production of Yvette Nolan’s work, by director Nina Lee Aquino, seems to have created much controversy over the choice of cast, which overshadows the play itself. Although, the fact that this is the second production of this particular piece is indeed something to be celebrated. I do however understand that sometimes allies are necessary in order to reach a new audience, and a certain collaboration occurred to bring this intercultural production to life. Walking out of the theatre, I found that I was unmoved by performances. There were raised eyebrows a couple of times, but other than that nothing overly thought provoking ensued. I did enjoy the interesting lighting; the stage dressing allowed for maximum movement with minimum set changes, and the use of the moon image to illustrate the passage of time was clever. 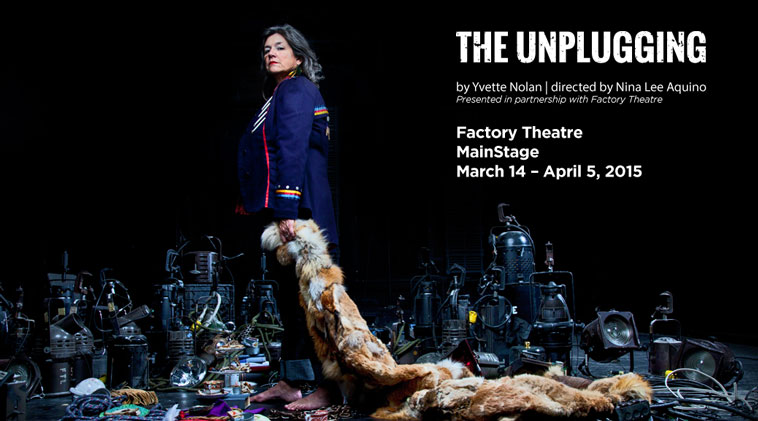 This review takes a hard-line stance on some of the obvious challenges a production like this puts before a cast and director, challenges that must be expected for production houses that push boundaries. To relegate the reasoning for casting as a lack of Indigenous actors in the field is an old excuse, as evidenced by the stir it caused on social media and in the community. Of course, the choice to put non-native actors in the lead roles of an Indigenous play would create controversy and high emotions in the Indigenous community. That fact alone influenced the performance in a way that is difficult to put into words. I found myself questioning everything from the interpretation of the set design to the wardrobe. These characters were written as post-apocalyptic, yet to watch them with their fur-lined clothing, one couldn’t help feel the reminiscent and ever-present stigma of pre-colonial times with the characters’ head to toe furs. I was a bit disappointed. I would have thought the latest cold weather technology and clothing would have made more sense than furs. Especially since it had been less than a year since the “unplugging”, one wouldn’t have had the time to tan furs, or be selective about fashion. The interesting ‘ceremonial’ waving of hands in the air during drumming sequences created discomfort as well, I can only assume the characters were in ceremony.

As a contemporary urban Indigenous person I found that—try as I may—I could not relate to these characters.  While it was beautiful to hear a smattering of Ojibway terms, and some reference to the lunar calendar in the passage of months, I found myself wanting a deeper, more resonant connection between these women, and the moon since it portrayed such an integral part of the set design. I watched the play wondering what I would learn about Indigenous peoples if I knew nothing, and I worry about the messages that translate through this production to those who know very little.

As the daughter of a hunter, and a science-fiction buff, my interest was piqued upon hearing about a story about two elderly women reclaiming traditional hunting in the dead of a post-apocalyptic winter. Watching a story unfold about how the two had been exiled from a commune led by a fascist dictatorial-type character, and where hunting is a pivotal part of the story, I chuckled to myself as I watched Elena’s (played by Diana Belshaw) stance in one scene where she aimed a gun at an intruder. I thought, “If she tried to shoot a gun like that, especially a double-barrel shotgun, she would either drop the gun or dislocate her shoulder. Either way she would totally miss her mark.” Clearly Ms. Belshaw has never hunted or held a gun, and who needs to these days?

Indigenous people adapt, that’s how we thrive with our culture today. This production alludes to that connection and the resiliency of our communities. There was so much potential to see the powerful, emotional recollections of Elena’s connection to her Grandmother while out there living on the land, and the great gift that turned out to be for her continued survival, yet sadly that connection was lost in Ms. Belshaw’s performance. I was however glad to see the continuance of knowledge referenced briefly in the end.

The considerably more youthful appearance and portrayal of Bernadette, played by Allegra Fulton, raised some eyebrows as the conversation turned to sex and ageism. What could have been a healthy discourse on human biology and pleasure only served to firmly settle Bernadette into the Pocahontas-like snare in which many of our Indigenous women are trapped: Slinky, over-sexualized, predatorial cougar (in this case), albeit with a generous heart for the poor, starving White Guy—Seamus—played by Umed Amin. Unfortunately, Seamus ends up stealing everything from the duo then bringing more people from their former commune to learn the survival skills that the feminine duo has to offer. Sound familiar?

The thought that went into this particular production and interpretation seems to take into account those who are not ready for intercultural displays of Indigenous knowledge—though they are being swept along whether they are ready for it or not. It would be different if the many Indigenous actors out there were lifted up and celebrated in mainstream roles, but they are not. As Indigenous and “other”, we are a long way from being a welcome part of “the norm”. Our Traditional ecological knowledge is still closely guarded, and we are still fighting for it to be recognized as a science and body of knowledge in its own right. Though, perhaps this type of creative interpretation is an appropriate and safe space for these conversations to take place between Indigenous and non-Indigenous people.

I will conclude by saying that the many capable actors representing, fighting for, and embodying these Indigenous knowledges have a right to feel miffed by being left by the wayside. After all, many Indigenous issues are still disregarded or outright ignored by current leaders, yet traditional ecological knowledge continues to be sought after in many different fields such as environment, resource development, and health. With the general discourse of society attempting to situate (dictate?) the Indigenous of these lands as ‘stewards’, one wonders if the question posed by Yvette Nolan in this piece is clearly addressing ALL individuals:

“When technology fails, and the distractions cease, when you are looking once again for Indigenous knowledge and generosity.  Will it be given freely as it had been once so long ago? Or will you simply starve? Wondering why you didn’t listen when you had the opportunity to do so.”

As individuals, as a country, as a community—are we really ready to move on in a good way, and what is the best way forward?

Amy Desjarlais is Ojibway/Potowotomi from Wasauksing First Nation. In 2003, Amy founded, EarthTALKER, a magazine focused on women and families. In 2008, Amy is the recipient of the FNTI/Ryerson University Practicum Award for Theory of Interconnectedness - An Indigenous perspective on political decision-making. Amy has an MA in Culture & History; her thesis, Emptying the Cup: Healing Fragmented Identity, explores an Anishinawbekwe (female) perspective on historical trauma and culturally appropriate consultation and is published by the Centre for World Indigenous Studies’ Fourth World Journal. Amy recently published her first non-fiction full-length book, Starblanket – A mother’s gift to her son. When she is not writing, Amy facilitates cultural workshops and drum circles. Amy is also a hand drummer and singer.