There are a whole set of laws, regulations, protocols, and incarceration facilities that are for migrants only. Remind you of the Indian Act much? 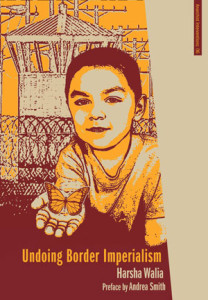 “We didn’t cross the border, the border crossed us,” is one of my favourite rallying cries from migrant rights activists in the southern United States (US).  Harsha Walia’s Undoing Border Imperialism (with a compelling foreword by Cherokee scholar Andrea Smith) makes the case for that cry with both intellectual clarity and heart sense.  And the quote is as true for Indigenous people on Turtle Island as for migrants around the world.

In this publication, Walia skillfully weaves a picture of injustice and resistance through storytelling, reframing theory, poetry, visual art and hard facts.  Thirteen guest contributors provide reflections that range from the angry to the poignant to the hopeful, and finally the powerful.

In the foreword, Smith points out that most migrant justice activism does not seriously question the validity of the colonial state and its self presumed right to not only draw imaginary lines on maps, but to wall off peoples from each other and decide who does and doesn’t get to cross.

Many migrant justice advocates suggest that the moral values of destination countries like Canada and the US are upheld and strengthened by relaxing border controls.  Canadians and Americans can think of themselves as saviours and rescuers with superior economic and political systems. This thinking ignores the history of genocide, land theft, and resource extraction that made these nations what they are.  It had nothing to do with their moral or cultural superiority.  Their emergence as powers had to do with centuries of land theft, enslavement, imperial adventures and legalized inequality—enforced by brutal violence—not just on Turtle Island but globally.

Furthermore, this approach to migrant justice ignores the ongoing violent and genocidal practices that Canada and other nations continue toward Indigenous communities and their internal citizens (particularly Brown and Black folks).  It ignores the role that these nations have in fostering war, supporting murderous dictatorships, destroying sustainable economies, and devastating the environment thus creating the conditions that migrants flee.

Smith’s forward establishes immediately the relationship between Indigenous and migrant struggles, both rooted in resisting land-hungry, resource-obsessed, cheap-labour-intensive settler colonialism.  She writes, “Harsha asks us to look at how anti-immigrant xenophobia, white supremacy, and settler colonialism are mutually reinforcing in ways that actually prevent us from seeing how these logics are fully connected.”

In Walia’s view, migrants are not just those who cross nation-state borders but are also those who have been forced to relocate and/or live within imposed boundaries.  Among migrants are those that, for a variety of reasons are forced to leave their reserve communities to resettle in urban areas.

Walia’s initial chapter quotes Indigenous North American activists discussing how “borderism” has divided communities, destroyed cultural identities, and eroded sustainable ways of relating to specific lands as well as Mother Earth generally. In other words, it is part and parcel of genocide.  She maintains that if migrant justice activism is to be successful and sustainable, it must recognize that migrant INJUSTICE is rooted in colonialism.

With this established, Walia goes on to explore how settler colonial capitalism benefits from criminalizing, abusing and using migrants and their children.

Absurd and inhumane laws as well as law enforcement practices keep mostly Brown and Black migrants in vulnerable, often appalling circumstances. There are a whole set of laws, regulations, protocols, and incarceration facilities that are for migrants only.  Remind you of the Indian Act much? Under this system, employers are able to engage in abusive practices ranging from the sexual to the financial without accountability. Meanwhile, the host country’s economy benefits from the cheap labour that migrants, not covered by employment standards, provide.

Border monitoring is a source of violence in the form deportations, detentions, raids, and generalized fear that migrants bring terrorism, disease, and criminal ways with them to new lands. Colonial mindset considers them a threat to “our way of life”.

The criminalization of migrants results in many languishing in for-profit prisons for years, in a kind of legal limbo, without access to due process or rights that apply to citizens.  Some are even deported back to situations where their lives, families and wellbeing are in serious danger.

Borderism in Walia’s view also creates, manipulates, and worsens the barriers and divisions across communities, creating “us and them” mentalities that deny the many ways that we are all invested in decolonization.

Undoing Border Imperialism spends many pages discussing the goals, strategies, and struggles of the organization No One is Illegal (NOII) and its chapters in Canadian cities.  It also explores questions around building relationships with Indigenous and other communities, and basing its work in decolonization, a feature that distinguishes this publication from most others on migrant justice. The later chapters share stories of NOII’s victories.

The final chapter completes the circle by bringing us back to where we started: a discussion of how migrant justice is inseparable from decolonization.

My only wish for the publication is that it was more readable for folks that aren’t familiar with academic or lefty activist jargon.

Still, Walia’s work transcends other discussions on migrant justice and makes a concrete case that Indigenous people and migrants (along with many others) have a crucial stake in decolonization, which includes shifting our relationships to each other as well as land and resources.

She writes, “Decolonization demands the valuing of Indigenous sovereignty in its material, psychological, [knowledges] and spiritual forms.”