As she stepped out of the shower, she sensed a presence. Someone was in her casita. This was her worst nightmare: trapped in the bathroom, naked, without her cell. Where did she leave it? The desk? The nightstand? She didn’t remember.

She hurriedly slipped on a sundress, uncaring that it clung uncomfortably to her wet apple-shaped body. She trembled with anger and fear but stayed alert for sounds of the intruder. In her bare feet, Kalehia Nalu quietly rummaged through her medicine cabinet for a weapon and found a nail file. There was also the long handled back brush hanging on a hook in the shower. As a tall, full-bodied woman with the biceps of a daily swimmer, there was a chance she’d put a scare into whoever it was. After fixing her long wavy hair with a tie, she grabbed her weapons in both hands, and cracked the door. Nothing.

She tiptoed forward until her heart skipped a beat at the sight of a fit young man, well over six feet tall, admiring a Solomon Enos print that hung on her wall. She took in an ochre tan, perfect topknot, and bulging shoulder muscles that clothing failed to hide. If he decided to get physical Kalehia was pretty sure she’d lose the contest. He wore a form fitting jumpsuit, with a fastened Nehru collar, made of some metallic smart fabric, unusual attire for summer in the New Mexican desert. Actually, it was unusual attire anywhere. Specialized work clothes? At least his hands were empty. He turned to greet her, eyes noting the makeshift weapons.

“Get out of my house!” she growled.

The stranger’s hands shot up in a protective gesture and he backed up into an end table. He sidestepped, stumbled on one of her jandals and fell to the floor. From there he regarded her with a tilted head, seemingly confused. “I apologize for the intrusion, Dr. Nalu.” His voice was as smooth as the creamy coconut sauce they put on the lab-grown fish fillets served at her favorite restaurant. “I buzzed. There was no answer, but your door was unlocked.”

“That’s not an invitation.”

He made a calming gesture as he sprang to his feet. “I’m not here to hurt you. My name is Hiko and I have a message.”

“Tell me outside,” Kalehia said. She raised her “weapons” menacingly. Hiko’s body language seemed benign enough, but she wasn’t taking any chances. He calmly opened the door and loped through. “I’ll wait in the garden, shall I?”

“Yeah, you can wait for the cops,” Kalehia said.

Hands aloft like someone was holding a gun on him, Hiko addressed her through the doorway. “Please, there’s no need for that. Melenahe sent me.”
“Mele? My sister? Why?”

“I didn’t mean any harm. Where I come from locked doors are … well, no one really has any need for privacy.”

“Really? You live in a commune or something?”

“Figures you know my sister.” Melenahe was such a Bohemian, she thought with irritation.

“I’ll be out here when you’re ready to talk.” He softly shut the door behind him.

Kalehia stood there for a moment, wondering what her next move should be. The courtyard was a public space with surveillance cameras that overlooked all activity. After some co-eds had been sexually assaulted in separate incidents some years ago, they’d launched a class action suit against the University of New Mexico, alleging criminal negligence. The University had settled for an undisclosed sum and nowadays was pretty serious about campus security. Hence the cameras. Besides there was always someone at home in the student residential complex and they were bound to hear her scream. Although, Hiko wouldn’t likely try anything in broad daylight. If he was like Mele’s other friends, he was probably a New Age flake, unaware or dismissive of social norms. That could make him annoying but not dangerous.

She slipped on some jandals, finished dressing, scrunched curls into her hair, traded the brush and nail file for a steak knife, and stepped outside into the quad’s rock garden.

Hiko sat comfortably in a lawn chair, studying his forearm. Or, rather, studying a data-filled screen built into his skin. Kalehia had never seen anything like it. When he saw her, he pulled his sleeve over it. “Prototype cell phone,” he explained. “The latest en vivo tek.” 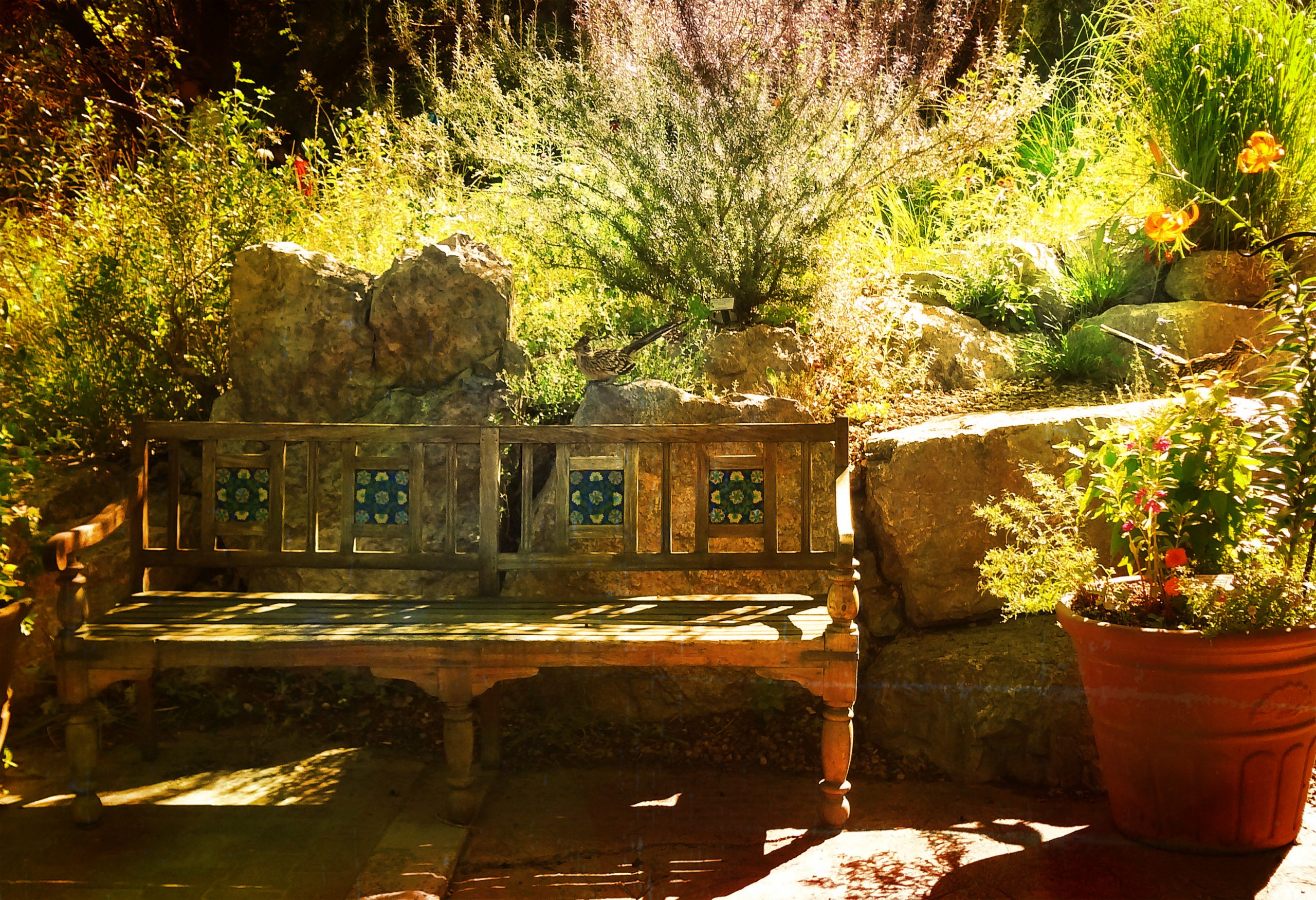 Kalehia wanted to ask him about it but w.as more concerned about Mele.

“The Melenahe I know is not your sister,” he replied.

Hiko made another calming gesture. Seated he wasn’t terribly threatening. “Hear me out, please. My Melenahe is your granddaughter.”

“Well, that’s a neat trick, seeing as I’ve never had children. Not to mention, I’m only 28 years old.”

“This is going to blow your mind but … I’m just going to say it: I’m a time traveler. From the future. Where your family needs your help.”

Oh, she thought. He’s mentally deranged. Then she had a second thought: Or maybe I am. Kalehia lowered herself into a chair opposite Hiko’s, stabbed the steak knife upright into the rock garden, and waited for more evidence of which of them needed professional assistance.

He smiled awkwardly. “I know you were treated for schizophrenia some years ago and since have been given a clean bill of health.”

“How do you know that?” It wasn’t on social media, and she preferred to keep the matter confidential. No need for that chapter of her life to jeopardize her chances of earning a PhD and scoring good jobs.

Hiko continued. “Your mother is a traditional healer. A Kahuna. She’s teaching Melenahe about plant medicines. Doesn’t understand why you chose haole science over a more traditional lifestyle on Molokaʻi. Just like your colleagues don’t understand what your family does.”

“That you could have learned from social media.”

He sighed. “In my time you’re a very well-known scientist. Celebrated by the family.”

“Is that why you called me Doctor Nalu?”

He tilted his head. “Ah! A slip. You would be in the PhD program now, wouldn’t you?”

“Assuming what you say is true, what do you want?” Kalehia asked.

“You get to know that once I convince you I’m for real.”

Kalehia swiped up her knife and stood, poised to go back inside. “Well, good luck with that.”

He had her attention.

“Turn the first one down. Biofield research is being well funded by the pharmaceutical industry. The second offer, that’s where you’ll make your mark: Epi-biofield Technologies, where you’ll learn to control the biofield.”

“So, you hacked into my job applications. I’m not impressed.” Although, it seemed he’d gone to a lot of trouble for an unfunny practical joke. He stood and she gripped the knife tighter. Damn, he was tall.

“You and Dr. Begay are going to be very close one day.” He leaned forward. “Very close.”

Kalehia took a startled step backward, half caution, half surprise. Unless Hiko could read her mind there was no way he’d know about her feelings for Begay. She’d never told anyone.

With artistic precision, Hiko tapped a mole on the inside of his wrist and sunglasses morphed onto his face.
Kalehia’s jaw dropped.

“We’ll talk again.” Hiko strode off and out of the quad like a rock star.

Kalehia scurried to her desk and checked the campus security feed to see where Hiko was headed, to a car, a university building or somewhere else, but couldn’t find him anywhere. She clicked to review the last several minutes in the quad. If she could capture Hikos’ face arriving, she’d be able to do a recognition search. But there was no sign of him. According to the cameras, no one had entered or left her casita in the last hour. There was no record of their conversation either. No evidence he had been there at all. Did that mean Hiko had hacked the system and deleted the footage? How? Did he have an accomplice? Kalehia suddenly felt very unsafe.

Then another thought occurred: What if she’d imagined him? Hallucinated? Were the imaginary kūpuna of her childhood back to haunt her?

When she had submitted her job applications Kalehia’s hopes had rested on the Epi-biofield Research Project, mainly because she wanted a chance to work with the renowned Professor Tanisha Begay. Maybe even had a bit of a crush on her. Kalehia was anxious about not finding work. She worried about having to quit school. Then again, she was nervous about working with Begay too. Her idol. Had all the anxiety led her to backsliding into illness? Maybe she’d conjured Hiko so he could tell her what she wanted to hear and calm her nerves. Not that he had.

In any case, the experience left Kalehia unsettled for some weeks. Either possibility, that Hiko was real or imaginary, were both disturbing. She thought of asking campus security to check on whether the surveillance system had been hacked or infected with a virus but the idea of them questioning her sanity after finding nothing amiss made her file that idea away. No. She’d wait. Maybe if she got the job she wanted, she’d never conjure up Hiko again.