Reconciliation is an ongoing conversation, and requires an unlearning to break apart colonialism, and relearn the pre-contact, pre-colonial gaze and history of Turtle Island.

The latest exhibition at Robert McLaughlin Gallery, Whose Home and Native Land is a collaborative effort between curatorial staff and Indigenous community members of the traditional territory of the Mississaugas of Scugog Island First Nation (Oshawa), featuring work from settler and Indigenous artists, yet mostly draws from a Euro centric permanent collection.

Whose Home and Native Land is a decolonial act, especially given the city of Oshawa is primarily a blue collared suburban bedroom community to Toronto (where very little Indigenous presence is visible or celebrated), yet the Robert McLaughlin Gallery, which boasts a land acknowledgement at the gallery door, is making necessary and interesting curatorial choices to build and rebuild important relationships. Featuring work by Norval Morriseau, Robert Houle, Kananginak Pootoogook, Peter Pitseolak, Douglas Coupland, Joanne Tod and others, Whose Home and Native Land is a collective curatorial conversation led by local Indigenous community, high school students from O’Neil Collegiate and Vocational Institute, and the in-house curators at Robert McLaughlin Gallery. It’s produced in partnership with Reagan Kennedy, Dawn Lavell-Harvard, and Alex Range, and is a dialogue-based show, and motion acknowledging the past and an attempt to move forward. 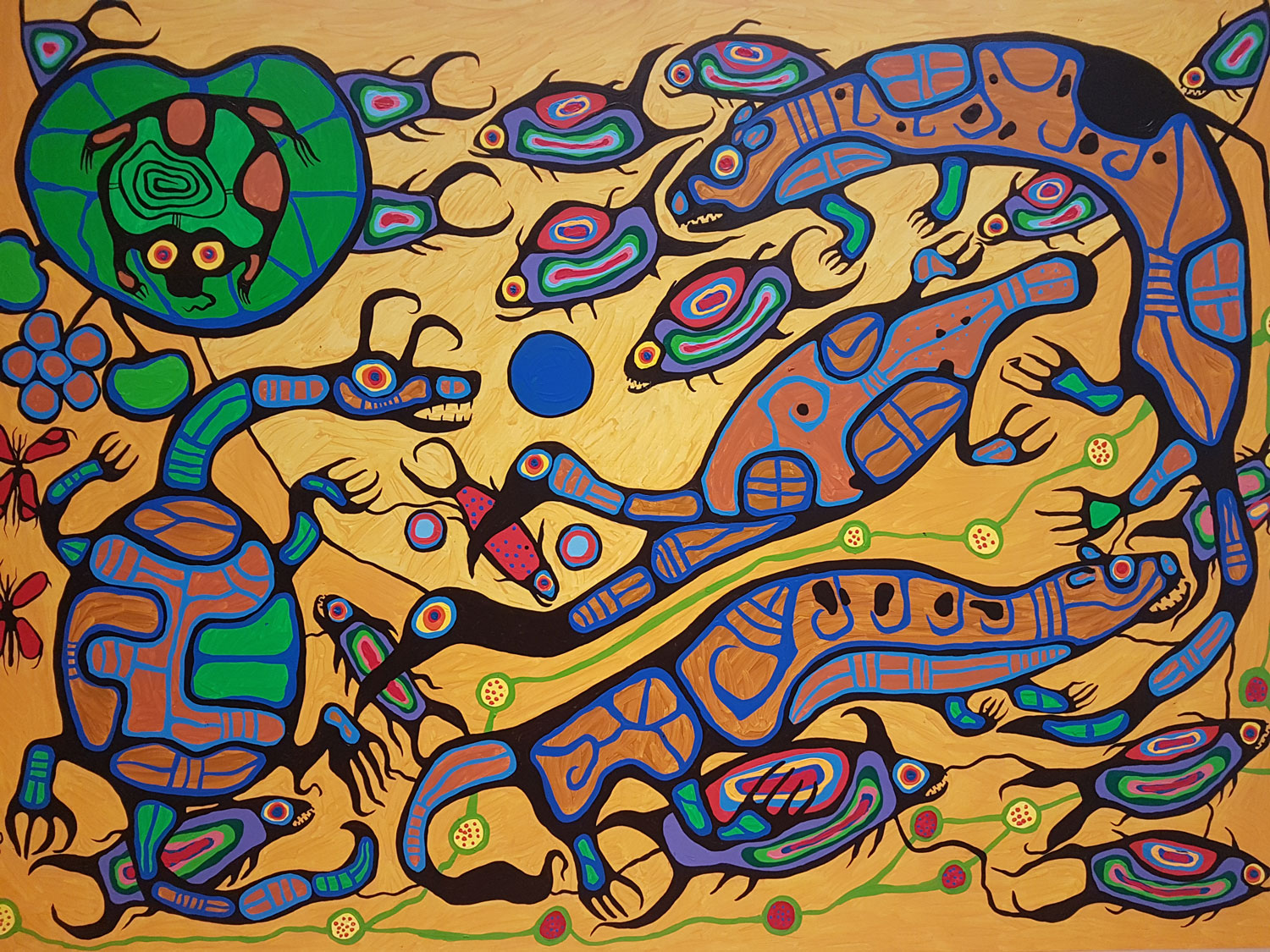 Two of Norval Morriseau’s acrylic and graphite pieces  – “Mother and Child” (1980), “Untitled” (1981), are exhibition’s most visually striking works, and boldly anchor the emotional, spiritual and political. Morriseau –also known as Miskwaabik Animiiki, Copper Thunderbird –is lauded as the Grandfather of Contemporary Indigenous art, as he was the founder of the Woodlands School of Canadian art, and member of the Indian Group of Seven. Morriseau’s work fuses spiritual, cultural and legends of his people in a brilliant kaleidoscope of colours.

Co-curator Dawn Lavell-Harvard cites Morriseau’s Mother and Child as speaking to her Anishnaabekwe heart: “Our mothers are the centre of our families, communities and the very heart beat of our nations,” she writes. “It is the loving relationship between mother and child depicted here that sustains our people, especially now as we struggle to cope with the on-going legacy of generations of colonization and oppression and abuse.”

The realities of colonization run deep, yet Indigenous artists have been working against its grain since time immemorial. Inuk sculptor and printmaker Kananginak Pootoogook’s stone-cut on paper stencil works “Metik” (1935), “Caribou” (1977), “Omingmungjuag” (1977), and “Walrus” (1977), placed amongst the work of Lucy Qinnuayuak, Peter Pitseolak, and Kenojuak Ashevak. Both “Caribou” (1977) and “Walrus” (1977) illustrate Pootoogook’s both delicate and humorous drawing style.

While settler/Indigenous conversations continue to evolve and more Indigenous artists’ work is being centred in many art institutions, yet witnessing Robert Houle’s “New Sentinel” (1987) and Douglas Coupland’s “Slogans for the Early Twenty-First Century” (2012), acrylics on plywood, which read – “Flag As Inappropriate,” and “Voting Feels Useless and No Longer Seems to Address Real Life,” two established Canadian artists, though speaks to whose art is celebrated, and whose goes under represented. For example, Coupland’s public sculpture Group Portrait 1957, was predominantly installed outdoors on the right side of the Robert McLaughlin Gallery in 2011, and Houle’s piece is only now being featured front and centre as you enter the gallery space. 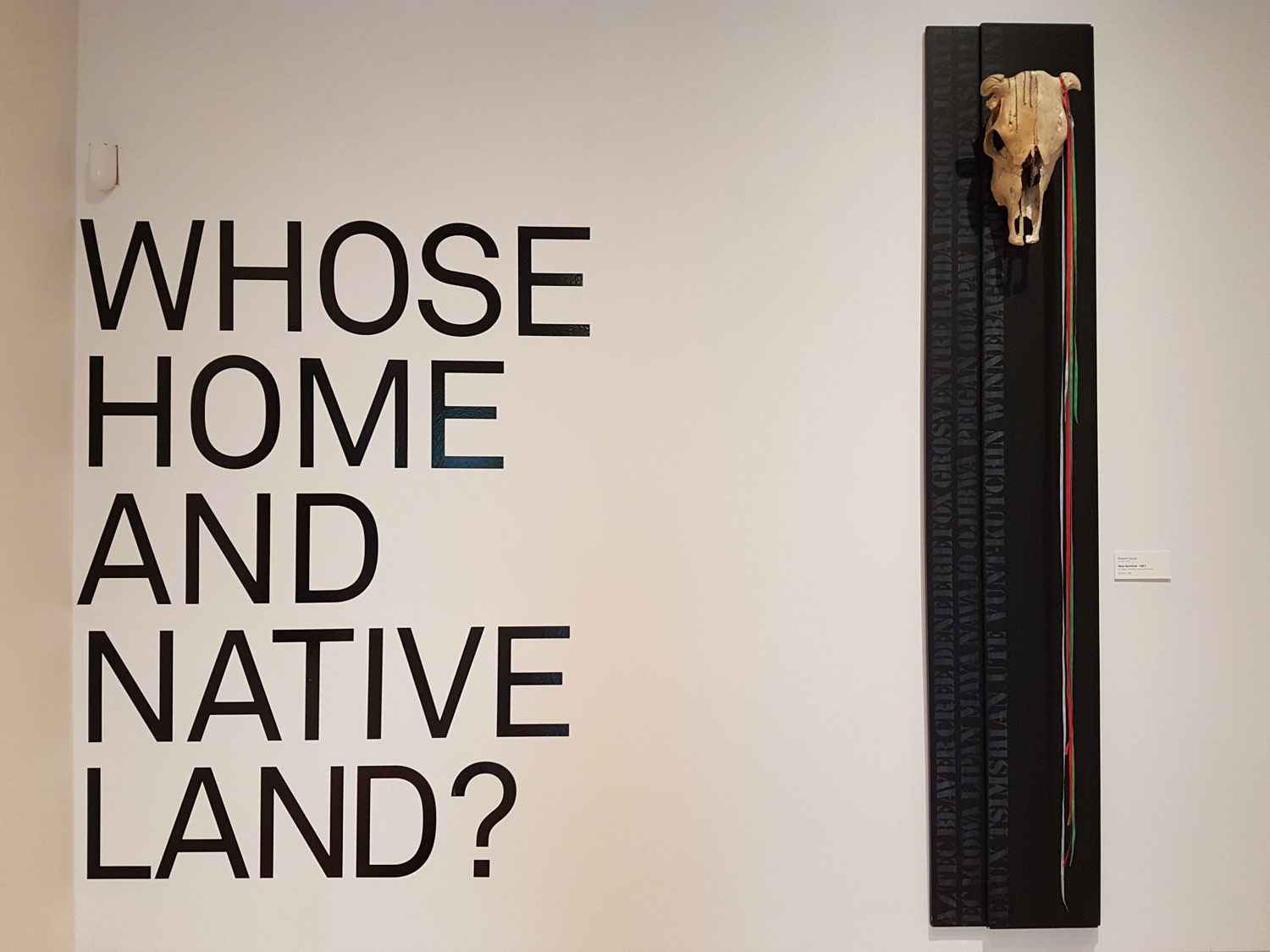 Carl Beam’s “Albert in Blue Zone” (1999), a silkscreen collage image, was curated by Reagan Kennedy, whose text is quoted in large vinyl on the gallery wall. “I chose this piece by Carl Beam not only to pay respect to this generation of Indigenous artists, but also for the many Indigenous peoples who work tirelessly and often alone to break down barriers within large institutions.”

While Beam was the first Indigenous artist to have their work purchased by the National Gallery of Canada, Whose Home and Native Land speaks to some of the permanent collection’s trailblazers of Indigenous art, but like any longtime running one-sided conversation, it requires more space opened for Indigenous voices, and less of a Euro centric lens.

Whose Home and Native Land runs at Robert McLaughlin Gallery until June 23, 2019. Drop-in tours are available every Thursday. For more information visit http://rmg.on.ca/ 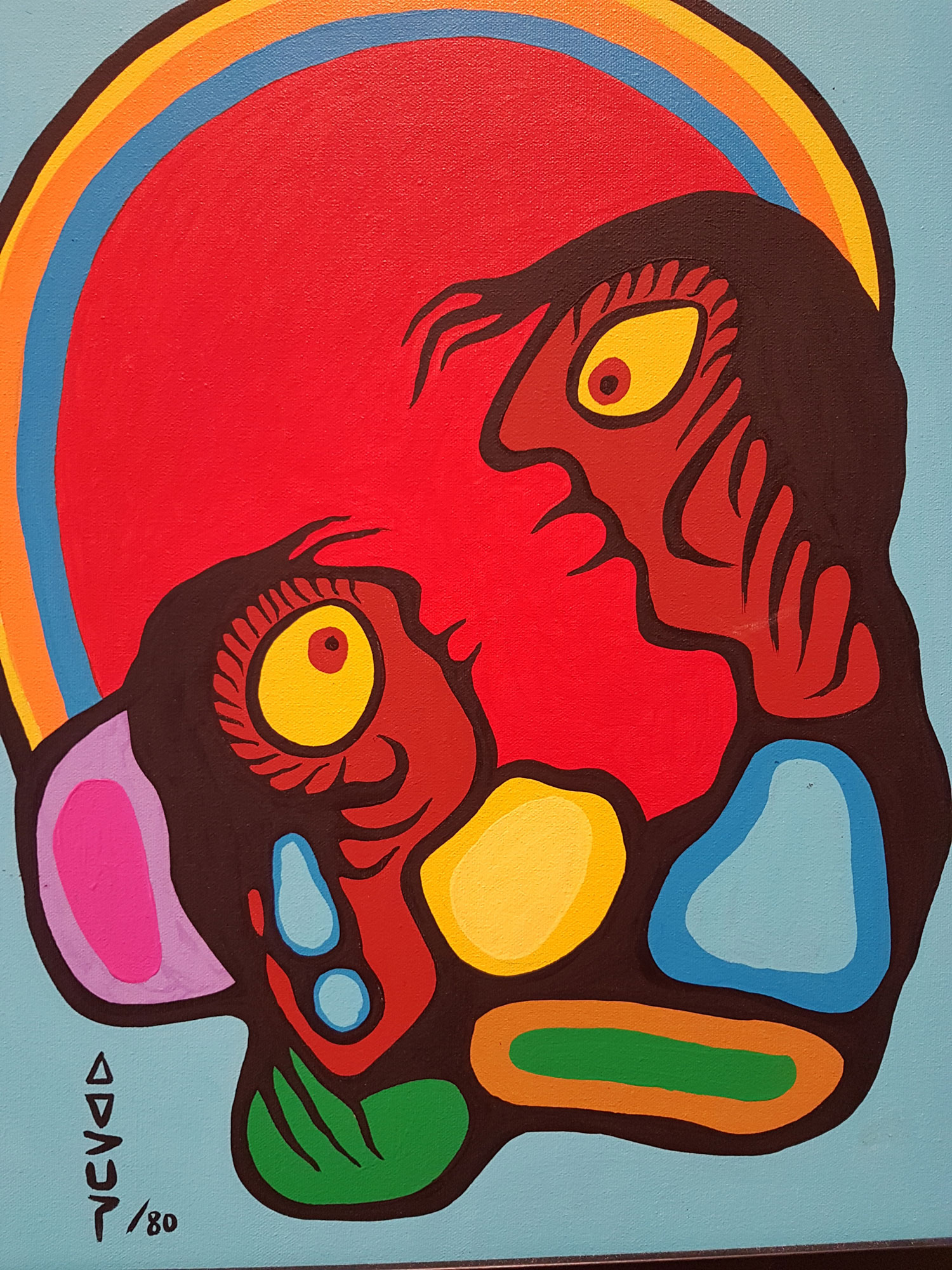 Previous : Review: You Will Wear A White Shirt
Next : SGAAWAY K’UUNA – BRINGING THE GAAGIIXID TO THE BIG SCREEN

Shannon Webb-Campbell is a mixed Indigenous (Mi’kmaq) settler poet, writer, and critic. Her books include: Still No Word (Breakwater 2015), the recipient of Eagle Canada’s Out in Print Award, and I Am A Body of Land (Book*hug 2019). Shannon holds a MFA in Creative Writing from University of British Columbia, and a MA in English Literature at Memorial University of Newfoundland and Labrador, and is a doctoral student at the University of New Brunswick in the Department of English. She is the editor of Visual Arts News Magazine.